Hempel World Cup Series to heat up in Miami 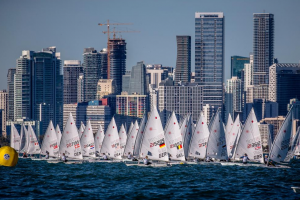 Hempel World Cup Series to heat up in Miami

The Hempel World Cup Series rolls into Miami, in the sunshine state of Florida, USA from 19 – 25 January 2020 for the second instalment of the 2020 Series.

205 sailors from 50 nations will race across seven fleets in Miami and the stakes are high for North American competitors. The event is the final opportunity for nations to qualify to the Tokyo 2020 Olympic Sailing Competition across the 470 and RS:X fleets, Laser, Laser Radial and Finn.

Racing commences on Monday 20 January and will conclude with seven Medal Races on Saturday 25 January, which will be broadcast live on World Sailing’s YouTube Channel.

ABB presents recommendation for zero-emission marine technology to US Congress