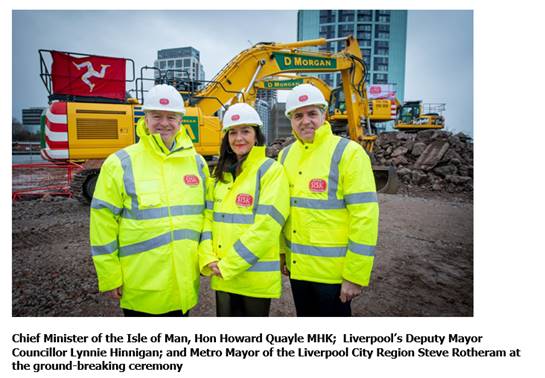 The Isle of Man’s historic maritime links with Liverpool were celebrated on Friday at a ground-breaking ceremony on the site of the Isle of Man Ferry Terminal in the city.

The event, led by Chief Minister Howard Quayle MHK, was attended by Metro Mayor of the Liverpool City Region Steve Rotheram, Liverpool’s Deputy Mayor Councillor Lynnie Hinnigan, industry leaders from the North West, representatives from Peel L&P and those involved in the design and construction of the £38 million development.

Mr Quayle said: ‘The Isle of Man and Liverpool share a strong relationship based on our maritime connection, with a ferry route which has operated for more than 200 years.

‘I’m therefore honoured to mark the start of the construction of the Isle of Man Ferry Terminal, cementing business, tourism and cultural links and forging even closer ties into the future.

‘This development stands alone as the only construction project the Isle of Man Government has undertaken away from Manx shores, and will be the only property we own outside the Island.

‘The project demonstrates the Isle of Man’s commitment to future-proofing connections with the heart of Liverpool and the wider region.’ 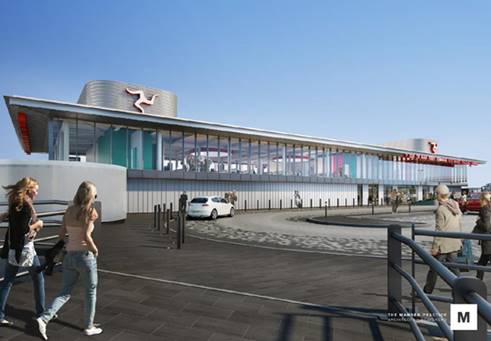 The terminal will be constructed at Prince’s Half-Tide Dock, within the Maritime Mercantile City World Heritage Site and the Stanley Dock Conservation Area. The site is half a mile downriver of the current Pier Head facility, which will be taken out of use once the new terminal is completed.

The terminal will sit within Peel L&P’s Liverpool Waters, the £5 billion regeneration scheme which is transforming 60 hectares of the city’s north docks, including the development of numerous residential, commercial and leisure facilities, as well as a proposed new £500m ground for Everton FC.

Construction is due to get under way in earnest this month following a site clearance operation which took place before Christmas. Contractor John Sisk and Sons Limited will undertake construction, with completion due by summer 2021.

It is predicted that the development will generate £3.2 million for the regional economy, and development opportunities are expected to attract further investment to the docklands.

A link road is currently under construction, with the £7 million cost being funded by Liverpool City Council as part of its £500m Better Roads programme.

Metro Mayor Steve Rotheram said: ‘Our waterfront is iconic and recognised the world over. The new ferry terminal will be a fantastic addition to it.

‘Not only does the new terminal cement our special and historic links with the Isle of Man, it opens new and exciting opportunities – for trade, tourism and leisure. We have supported the project from day one and I look forward to it progressing further in the coming months.’

Liverpool’s Deputy Mayor Councillor Lynnie Hinnigan said: ‘Like our new cruise terminal nearby, the new Isle of Man Ferry Terminal is a critical part of our regeneration plans for the north shore of Liverpool – connecting it better to the city centre and stimulating new growth and jobs.

‘The city council is investing a huge amount of money in the transport infrastructure to support this new facility and we are delighted work has now begun. When complete it will provide a fabulous link to our close friends on the Isle of Man.’

The UK’s Northern Powerhouse Minister, Jake Berry MP, said: ‘The new passenger ferry terminal is great news for the people of Liverpool and the Isle of Man and another exciting addition to the Liverpool Waters Enterprise Zone.

Darran Lawless, development director at Liverpool Waters, part of Peel L&P, said: ‘The new Isle of Man ferry terminal will be a fantastic asset not just to Liverpool Waters, but the region as a whole, helping to improve connectivity  to the mainland and offering new opportunities for tourism, jobs and investment to grow and flourish.

‘There’s been a huge amount of activity and progress on site in recent months, and we look forward to seeing the new ferry terminal form an integral part of Liverpool Waters.’

A time capsule was presented at the ceremony and will be built into the terminal to provide a snapshot in time for future generations. Among its contents is a special edition of Noble News, a newspaper put together by pupils at Henry Bloom Noble Primary School in Douglas to commemorate the occasion. The capsule also contains a message from the Chief Minister, drone footage of the Isle of Man, pictures of the site before it was redeveloped and a number of items of cultural significance.

‘Cyber Managed’ from Bureau Veritas: the pragmatic path to cyber resilience and protection