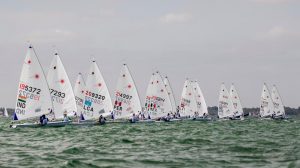 On Monday, the 182 sailors from 45 nations demonstrated their skills on spectacular Biscayne Bay in the first of six days of racing at 2020 Hempel World Cup Series Miami, USA.

This event marks the second instalment of the 2020 Series and the only stop in North America.

The competition this week consists of fleet racing for all seven classes on Monday through Friday and Medal Races on Saturday, January 25 featuring the week’s top teams. Medal Races will be broadcast live on World Sailing’s YouTube Channel.

As the racing heats up in Miami this week, the sailors here also have their sights set on the Tokyo 2020 Olympic Sailing Competition, only six months away. This event is the final opportunity for North American nations to qualify for the 2020 Games across the 470, RS:X, Laser, Laser Radial and Finn fleets.

Oetling got off to a strong start by finishing third in Race 1 and 12th in Race 2 and she is in fifth place overall. Devaux-Lovell is in seventh place after posting a 6-15 scoring line on Monday.

“It’s such a small fleet, you can really see who is out there and I may have struggled with that today,” said Devaux-Lovell.

“I’m going to take that forward and tomorrow I’m going to just sail my own race. Usually I’m strong in these conditions.

“It was quite shifty with pressure differences. Sometimes you have to get your head out of the boat and see what’s going on and sail to the breeze.”

Leading the Laser Radial fleet is Viktorija Andrulyte of Lithuania, who placed first and second today. The top American is Erika Reineke who is in fourth place (4-3).

Over in the Laser, two bullets for Joaquin Blanco (ESP) puts him top, with Andrew Lewis (TTO) and Stefano Peschiera (PER) close behind.

“Today was a tricky day on the racecourse,” said Evans. “We got a clear start in the first race, got a good lane, and just played the shifts upwind and downwind, so I’m happy with my results.

“The breeze picked up a bit in the second race and they put up the free pumping flag. We had another good start and two good downwinds for another good result.”

Along with racecourse and shifting conditions, Evans is also tracking his primary competition this week.

The American selection process also continues this week in the Finn. After one event, Luke Muller has an eight-point advantage over Rio 2016 bronze medallist Caleb Paine. Muller earned the bronze medal last year in Miami.

Following wins in both Race 1 and Race 2, Paine takes an early lead in the Finn. Two Americans are in the top four, as Muller is in fourth place (5-3).

“I’m just focused on my own sailing this week,” said Paine. “I’m working on fleet management and trying to minimise splitting away.

“We are also emphasising downwinds, but it was a bit of a struggle today trying to get the right feel for the downwinds. But all-around it’s been much better, just a few minor mistakes that can be easily corrected.”

The race for Olympic qualification for the 470 Men in North America is between Canada and Mexico, who each have three teams. Leading the way between these two countries are Hector & Jeronimo Guzman of Mexico who stand in 20th place overall after two races (14-25).

“We are trying our best not to be too aggressive this week,” said Jeronimo Guzman. “We want to sail as smart as possible and be faster than the other countries we are competing against for the Olympic spot. We need to focus on having good races so we can be at our best.”

In the RS:X Men’s fleet, two wins out of three for Pedro Pascual (USA) sets him ahead of David Mier Y Teran (MEX) and Ignacio Berenguer (MEX).

By Jake Fish – US Sailing