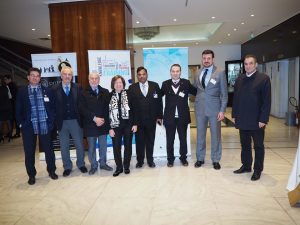 The Hellenic Branch of the Nautical Institute, comprising members from merchant navy ranks, organised a workshop at the War Museum of Athens on Wednesday, January 22, entitled “Professional Development in the Marine Technology Era – A Holistic Approach ”.

The main focus of the conference was the conviction of members of the institute that nautical education and vocational training in Greece should be upgraded to a formal (equivalent degree) and substantial level (field of knowledge), given the ever-increasing specialisation needs of merchant navy officers. Greece is one of the few exceptions among countries where studying at merchant marine academies does not amount to a Level Title 6.

To this end, The Nautical Institute Hellenic branch conducts quantitative and qualitative research, the results of which will be announced shortly, with an extract having been presented by the secretary of The Nautical Institute Dr Emmanuel Nicolaides, assistant professor Frederick University, managing director Premium Consulting.

The main sponsor of the event was Chartworld International whose CEO Steven Schootbrugge gave a presentation on the technological developments that are expected to change the business environment of commercial shipping in the coming years.

The conference also featured views on vocational training from  Popi Lyrintzi, founder, owner, and managing director of KC Lyrintzis Group; as well as a look at the impact of soft skills on the organisational and learning culture of seafarers by Spiros Kottoris, learning and development manager of Potentia, executive coach and trainer, and Chrysoula Patrikiou, founder and CEO of Potentia.

The workshop was attended by a representative of The Nautical Institute, Capt Maneesh Varma, training and accreditation development manager, who emphasised the need for continuous specialization; also addressing the need for training was George Xiradakis, founder and managing director of XRTC Ltd. and vice-president of the International Propeller Club of the United States.

The event was opened and reviewed by Capt N A Aslanis, chairman of The Nautical Institute Hellenic branch, and a cocktail was offered by Chartworld International.

The “F” word “applies” for the Markets and Geopolitics too…