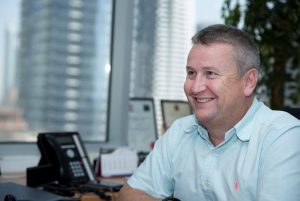 Chris David, Harris Pye’s COO, who will leave the company in mid-April

Chris David, Chief Operating Officer (and CEO from August 2019)  of Harris Pye Engineering Group, a Joulon company, has announced that he is to leave the company in mid-April. This follows the announcement in 2019 that Harris Pye CEO, Mark Prendergast, will retire in May 2020.

Chris David explains: “After working alongside Mark for almost 20 years and travelling the globe constantly, I am now going to spend more time with my family back in the UK.

“I am proud of the Harris Pye staff and the strong order book this year is testament to their hard work and commitment. I wish the company’s new Managing Director, Graham Roach, and the Joulon team, continued success in the future.”

Chris David, a Marine Chief Engineer by profession, joined Harris Pye’s Singapore office in 2001 focusing on the FPSO conversion market as technical superintendent. A year later, he moved to the UK office and worked his way up to Chief Technical Officer in 2007; and became COO in 2018.

During his time at Harris Pye, Chris David has overseen all projects, including offshore oil and gas assignments in every continent, and at sea – earning the company ‘the shipyard without a shipyard’ reputation as they work on rigs/ships/FPSOs under way or in the field. Company skills now include boiler design and manufacture (for marine and onshore uses – including biomass plants) and a wide range of offshore and onshore engineering projects.

He is proud of taking a boiler repair company to a global offshore and land-based EPC contractor. He has contributed heavily to Harris Pye’s vision by striving to spearhead technological advancements within the industry, thus bridging the gap from concept to reality with regards to project execution.

Another passion is developing new talent. He takes pride in the accreditation programme developed with IMarEST for Graduate Engineers and, through Harris Pye’s internal training programmes, as well as sponsored external programmes at numerous colleges and universities.

His own CPD includes becoming a Chartered Engineer, Chartered Marine Engineer, a Fellow of IMarEST, Fellow of RINA, and a member of SNAME and AISC. He has also held the post of Honorary Chairman of the IMarEST UAE Branch.