Port of Amsterdam prepares for growth in biomass 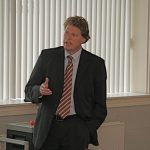 The port of Amsterdam is gearing-up for a boom in biomass volumes as a result of an increasing focus on renewable energy and new Dutch Government proposals.
Currently, the Dutch ports handle 1.5 million tonnes of biomass each year, but as a result of the growing requirement for biomass in North European countries, it is expected this will increase to around 13.5 million tonnes by 2020.
The port of Amsterdam already handles some biomass from source countries including Canada, the US and Brazil, but it expects its volumes to reach six million tonnes by 2020.
To meet the expected growth in this sector, the port will allow existing fossil fuel terminals to expand but will not allow the building of any new ones as it increases its focus on bio-energy.
Also, in co-operation with the port of Duisburg, Port of Amsterdam is redeveloping a transhipment terminal in Duisburg to enable the storage and transhipment of biomass to Duisburg for customers from Amsterdam.

Where possible, Port of Amsterdam has also been supporting businesses hoping to benefit from the growth in biomass through a range of activities, such as conducting in depth market studies, promoting biomass in source countries and establishing contacts with hinterland customers.
Managing Director of the Commercial Department of Port of Amsterdam Koen Overtoom
says the growth in European biomass demand is largely due to moves by Germany to phase
out its nuclear power stations by 2022 and an increased focus by other European countries
on energy sources that are less polluting than fossil fuels.
But the port also hopes to benefit from proposals recently unveiled in the Dutch Government’s Energy Report 2011, which include a requirement to make the use of some biomass mandatory at the country’s coal-fired energy plants and for the nation’s use of renewable energy to be increased from 4% in 2010 to 14% by 2020.

In anticipation of the new proposal being passed, some coal fired power stations in the south of the country are already blending in biomass.
Overtoom says it is estimated that by 2020, the Netherlands, Germany, Scandinavia and the UK will require 15 million tonnes of biomass per year.
“As a result, the port of Amsterdam will acquire a significant market share in the north-west European market for biomass transhipment, ” says Overtoom.
“The port of Amsterdam is strong in energy, ” he adds. “Most of the cargo that moves through the port of Amsterdam consists of oil and coal.
“This provides the energy that the Netherlands, the rest of Europe and other countries in the world so greatly need.”

Ready for biomass
Businesses based in the port area recognise the potential for growth in biomass and are already starting to invest.
The growth of Greenmills and Vesta Biofuels’ bio-diesel plants, situated at the port, and the fact oil, coal and dry bulk companies are also investing in bio-energy, is proof of the growing confidence in biomass’s potential.
Also, other companies are in the process of drawing up contracts to build new biomass handling facilities, but are waiting for the legislation to become final.

“We are confident that the demand for biomass will pick up speed within one or two years, ” says Marco Holleman, Director of MAJA Stuwadoors, a specialist in the transhipment of dry bulk cargo.
“We have one storage facility available and we will continue to invest as soon as there is more certainty about the import of biomass. The Government should provide clarity on this.”
Niels Boetje, Director of IGMA, a terminal for dry bulk cargo and subsidiary of food and agricultural producer Cargill, says it is in the process of negotiating with biomass manufacturers.
“The most advanced project is wood pellets from Georgia in the US, ” Boetje says. “The paper production industry in Georgia used to be thriving.
“Now that less paper is being used, Georgia’s entire wood industry could be used for biomass as the ground is not suitable for crop production.”

This is also a sustainable solution, because biomass production would not replace the production of human consumption foods.
Boetje expects IGMA to tranship about 200, 000 tonnes of biomass by the end of 2012, in particular for destinations in the north of the Netherlands and Germany.
In anticipation of this, IGMA will build 5, 000sq metres of additional biomass storage facilities at the port of Amsterdam.

Enough to adapt
Bulk Terminal Amsterdam (OBA) is also in conversation with potential biomass customers. “We have five storage facilities right under the cranes on our deep sea quay that can be used to store 110, 000 tonnes of biomass, ” says Hans Mattheyer, Manager of the Commercial Department at OBA.
“If demand increases, we are flexible enough to adapt because we see opportunities for expansion in covered storage.”
According to Mattheyer, biomass is maturing as a product. “Five coal-fired energy plants in the south of the Netherlands are already blending in biomass, ” he says.
“The Dutch Government’s decision to make co-firing mandatory for all coal-fired plants could result in a further increase of biomass supply.
“The developments in Germany are also important. The recent decision to close all nuclear plants over the next few years makes the question to which extent biomass will contribute to electricity generation in Germany very current. Germany is a huge potential market for biomass.”
He adds:Biomass in Germany on the rise “These developments will strongly increase Amsterdam’s potential to play an important role in biomass logistics.”

In Germany, biomass is mostly used for heating public buildings and homes (with heaters) and the growth potential is obvious.
Ludger Spohr, Manager of Business Development at VIS NOVA Trading, one of Germany’s largest producers and traders of wood chips and wood pellets, points out that in 2011, biomass consumption in Germany is expected to reach 1.4 million tonnes, compared with 0.5 million tonnes in 2006.
Future growth expectations go as high as 140 million tonnes, but that prediction is optimistic as the extent of increases in the use of biomass are difficult to predict, he adds.
“The European market for biomass will grow because of pressure to reduce CO2 emissions, “ says Spohr.
“But this depends on so many factors, such as oil price, whether or not nuclear energy is phased out and the extent of government subsidies for the use of biomass.”

At present there are no plans by the German Government to follow the lead of the Netherlands and make the co-firing of biomass mandatory at coal-fired power stations.
However, Spohr says if it does, the potential for biomass would be huge: “We burn 250 million tonnes of coal per year in energy plants. A small percentage of mandatory co-firing would mean huge amounts of growth.
“But, the German Government wants to be absolutely certain that co-firing is economically viable before making it mandatory.”

Attractive price and service
Given the anticipated growth, VIS NOVA is about to start buying and distributing wood pellets itself, in addition to importing wood pellets for customers.
“The conditions in Amsterdam for the European import of biomass are excellent, ” concludes Spohr.
“Amsterdam is conveniently located. It is important that the price is attractive; a 50 cent per tonne saving makes a huge difference given the amounts involved.
“Other important factors are storage facilities, a smooth running operation and whether or not the product is handled appropriately. No loading in the rain, for example.”
Overtoom concludes: “Biomass volumes are clearly going to grow over the coming years as demand for alternatives to fossil fuel and nuclear power stations increases.
“We are confident that the port community in Amsterdam – and businesses in the wider Amsterdam area – will be amongst the key beneficiaries of this change thanks to our location close to the main consumption areas, our specialist handling abilities and future port developments.”