The www.allaboutshipping.co.uk Top 100 women in Shipping for 2019 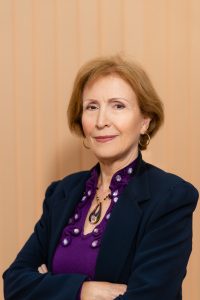 The www.allaboutshipping.co.uk Top 100 women in Shipping for 2019

2019 was the year devoted to Women in the Shipping Industry: “Empowering Women in the Maritime Community” was IMO’s theme for World Maritime Day 2019. This year, we …drop our annual lists of Top 100 people, events and other categories of citations and we prioritise our Top 100 women. That was a very difficult decision but all things being equal, honouring our Seawise Women at this turning point was a MUST! During January 2020 our team worked non-stop in collecting and collating info, notes and other ‘bits and pieces’ to ensure a fair and just survey honouring Women. These rankings, although at first glance might contain some surprises, if you go in depth you will see the real qualities and what each woman nominated has offered and influenced both our shipping world and the wider female community to all intents and purposes.

9   Bridget Hogan, Director of Publishing and Membership at The Nautical Institute, WISTA-United Kingdom

76 Julie Lithgow, Director at the Institute of Chartered Shipbrokers and WISTA UK member

Seafarer journeys in spotlight for Day of the...

Thank you for the honour, it is a great surprised! I recognised the names of many friends in the list and they all are wonderful professionals! Anne our dearest Anne Zade, also deserves to be there, her work parallel to yours have made possible that this publication is internationally recognised as a truly maritime press thank you!

Wonderful to see Anna Kaparaki in the list. She has done so much to drive links between Propeller Club Liverpool and the maritime student population. So richly deserved! I would hope next year that women such as Sue Henney, Charlotte Morton, Robyn Pyne, Hazel Sivori, Holly Bibby and Anneley Pickles make the list. We are so blessed with such incredible women in maritime in Liverpool! Come up and meet them…you may have to make it a Top 200 next time 🙂

Delighted to see Steamship’s Anna Yudaeva at 92, the only P&I Club employee I could see on the list. Congratulations to our correspondents Rosana Velasco of Hispania P&I Correspondents (35) and Ida Stier of Grupo Stier at 98. Well done to all.

Thank you so much I am honoured to be amongst such amazing women!

What an honor to be included amongst a list of such excellent contributors to the industry I love! Thank you so very much for this recognition!

I am very happy to see Mrs. Anna Yudaeva of Steamship in this list of shipping experts, although her ability, merits and level of knowledge do worth more highest place. Dear Anna, well done and thanks.

Such a great initiative! And I’m so grateful for the surprise of finding my name in the list, as I was only reading for inspiration and spotting talented and inspirational women!

I’m delighted and humbled to be included in this list. I know I speak for many when I say that shipping’s journalists and editors are often overlooked in these kind of lists, but the work we do is no less important in shaping and challenging the shipping industry. Congrats to all my fellow nominees too; together we make a difference in the maritime world.

Thank you so much for this recognition and very nice surprise. I am honored to be amongst such amazing women in the maritime industry!

I am proud of my dear friend Asli, you inspire everyone and I am sure we will have more Turkish names on this list that are guided with your light.
Congrats!!

Although Aslı isn’t a Kaptain and has been falsely claiming she is to become more recognised in the maritime industry.
She is only looking for sell gain and not to help others

Aslı claims to be a ‘Kaptan’ and falsely uses this rank to self promote herself for her own personal gain and not to help others….the credentials of such a person should be checked before issuing awards such as pwn’s gender balanced leader or young ships top ten woman to watch.
It is these false claims of being a ‘Kaplan’ that has pushed Aslı into such awards.
Speaking at events and conferences claiming to be a Kaptan and companies wrongly and unknowingly promoting her as such is a detriment to the maritime industry especially here in the UK where many woman work so hard to become real captains.

Thank you very much, I am honored!!!

Thank you very much indeed! I am honored and now inspired further more to be amongst such wonderful women if shipping !

Thank you very much indeed! I am honored and inspired!

Wonderful to see so many excellent people here and sending my respect to industry colleagues in this list. All of us work hard to do our bit in a truly innovative, exciting and forward thinking maritime world. It’s a privilege to be able to work with you. Thank you.

So pleased to many ladies accomplishing great things! Congratulations!
Throughout over 20 years I have had the opportunity to see Maria Dixon work hard and with great passion contributing to the Shipping Industry.
Beyond her dedication and efforts she is always willing to spend time and energy to help others! We all appreciate that, so congratulations on this recognitions of your merits. You have made us all proud! ??

Seems that you need to be a no one, but been member of WISTA to be in the list of top 100 Women. Thats how this tyoe of lists loose importance, and no one beleive tthem.

Many thanks for the great honour of being included among the extraordinary women on this list. Let’s hope 2019 will not be the only year of empowering women in the maritime community.

Honoured to be part of this list of amazing women in the industry. Thank you.

I am disappointed not seeing Asian Women in this list ? Whats your criteria ?

I am most delighted that I have been included in this List of the 100 Top Women for 2019 by AllAboutShipping.

Congratulations to all of you, as well as other women included in the list and all women who did not make it for the list this time, wishing them wholeheartedly that one day they will also make it to the Top.

[…] The previous year’s list and its finale became the most Popular Post of all times  in Allaboutshipping! […]