The Thirtieth Anniversary of the Atlantic Conveyor – 25 May 2012 approaches 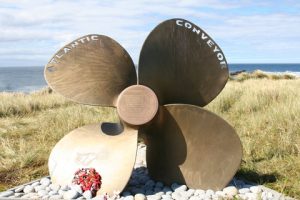 Perhaps the most famous merchant vessel to be lost in the Falklands war was Atlantic Conveyor, a 1, 200 teu containership built at Swan Hunter in 1970 and operated by Atlantic Container Line, a well known shipping firm at the time.

Requisitioned by the Ministry of Defence, it carried no weapons for either offensive or defensive purposes, thanks to uncertainty over the legalities of arming auxiliary ships.

On May 25, 1982, Atlantic Conveyor was hit by two Exocet missiles carried by Argentinian jets. The warheads exploded after penetrating the hull close to stores of trucks and fuel, resulting in an uncontrollable fire.

The was a serious blow to the British logistics effort. The ship was carrying Harrier jump jets on deck and, to some extent, acted as a third aircraft carrier after warships Invincible and Hermes. It was also carrying four Chinook helicopters, which should have played a decisive role moving soldiers in the impending assault on the Falklands capital Stanley.

Luckily, one of them was airborne at the time, but the other three were destroyed. Also gone were six Wessex helicopters, tenders for 4, 000 men, mobile landing strips and a water desalination plant.

Atlantic Conveyor became the first British merchant vessel lost at sea to enemy fire since the Second World War. Twelve men died as a result, including the master, Ian North, who was posthumously awarded the Distinguished Service Cross.

A  Memorial exists in Cape Pembroke (near port Stanley- East Falkands) worth visiting if you are there,  as well as a plaque at Trinity Gardens in London for those lost in this tragic event.

This news acts as a reminder for all embattled sides in a war NOT to attack unarmed cargo ships. My late father Captain Nicholas M. Faraclas survived twice in the Second World War as a Chief Officer when both the cargo ships he was serving on where hit by submarines.  I know the feeling and have been explained of the horror of such despicable actions.  Credits to Peter N. Pontikos for the reminder and his pictures as well as to Lloyd’s List for the article abve they run on 30 March 2012.

Sale of the m/v Hellenic Carrier

Hi
Thanks for this page. I enjoyed watching Atlantic Conveyor being loaded in Plymouth Sound, from Jennycliff before she went to the Falklands. I was learning to be a ship’s radio officer at the time and the loss of Atlantic Conveyor hit me quite hard. My best wishes to all the families of those who were killed; there are many ordinary people around who still remember and still care.
GA