The Success Story that is Greek Shipping and Posidonia 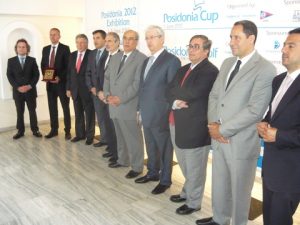 A comprehensive conference programme, a new venue and an enhanced networking and recreational calendar are the highlights of the Posidonia 2012 week which sets sail this Friday with its trademark Posidonia Cup Yacht race. The world’s premier maritime event is also set to create a new record in terms of exhibitors and visitors as it enters its fifth decade, confirming that Greece is open for business. Posidonia exhibition opens on June 4 at Metropolitan Expo Centre, which is equipped to provide enhanced services and an overall better experience to the estimated 1, 870 exhibitors from 87 countries and 17, 000 visitors expected to go through its gates during the five day event.

The modern, state-of-the-art venue boasts a floor space of 60, 000 square metres that includes dedicated conference facilities which will host a busy schedule of meetings and seminars in what is Posidonia’s most comprehensive conference programme ever. “Our exhibitors and visitors will have the opportunity to attend a wide array of seminars on important maritime topics ranging from shipbuilding to piracy and from environmental policies to new technologies, all within the comfortable confines of Metropolitan Expo’s facilities”, said Theodore Vokos, Project Director of Posidonia Exhibitions organisers of the event.

“For the first time this year Posidonia will also focus on the cruise industry on the back of recent developments which have ushered the country to a post-cabotage era, as Posidonia highlights the importance of sea tourism for the Greek economy”.

Described by its organisers as a unique blend of business and networking at the heart of shipping, Posidonia is the most eagerly anticipated biennial maritime forum and is always well attended by senior shipping executives who converge to Greece every two years to network and mingle between them and with representatives of the indigenous shipping industry.

The Chinese shipbuilding industry will once again field the strongest contingent of exhibitors many of whom will be deployed at the country’s 1, 300 square-metre national pavilion. A total of 21 nations from Africa, Europe, North America, Latin America and Asia have committed national pavilions for this year’s Posidonia.

Other Asian national pavilions include those from Japan, South Korea and Singapore. According to the Greek Statistics Authority, a total of 76 per cent of the 2, 066 boats operating currently under the Greek flag were built in Chinese and South Korean shipyards. In total, people from 87 different countries will co-exist for a week on the exhibition’s floor, a clear indication of Posidonia’s significant global appeal.  One of Posidonia’s main attractions for the world’s biggest shipbuilding companies is the strong links between the event and the representatives of Greece’s shipowners who collectively operate the world’s largest commercial fleet.

A total of 3, 325 ships of a 227 million dwt combined capacity and an average age of 10, 5 years is in Greek hands today making Greek shipowners a major influencer in the critical sea transportation sector as well as a coveted marketing target for the full spectrum of the diverse maritime industry. “That’s because, apart from their global leadership as the number one force in absolute numbers, they continue to place significant orders and particularly in the bulk carrier category which accounted for 62 per cent of Greek placed orders in the first quarter”, said Vokos.

“This is a tangible proof confirming that Greek shipping remains the biggest buyer for newbuildings and ship services and equipment”. It should be noted that the Greek-owned fleet contributes a significant amount to the Greek economy. It is estimated that in the decade between 2000 and 2010, Greek shipping contributed to the nation’s economy a total of Euro 140 billion, or half the country’s public debt as it stood in 2009.

“These numbers reflect the might of Greek shipping and signify the importance of Posidonia which for five decades has been actively promoting the country’s biggest economic contributor to the world”, said Vokos who added that the event also brings an estimated revenue of Euro 50 million to Athens and Piraeus companies offering hospitality, transportation, stand construction, catering, entertainment and event organisation services.  Part of this spending is induced by the plethora of networking, hospitality and sporting events which traditionally dot Posidonia Week’s calendar. Making its debut this year is the Posidonia Golf Tournament that will tee off at Glyfada Golf Course on Sunday June 3rd with the support of Thenamaris and Costamare.

The event joins the Lloyds Register-sponsored Posidonia Cup sailing regatta, which has been a permanent feature of Posidonia Week since 2002 and the 3rd Posidonia ShipSoccer Tournament completing an exciting schedule of recreational networking opportunities for senior shipping executives.

“Posidonia is much more than an exhibition”, said Vokos. “It is a shipping industry institution, a forum of multiple platforms that transcends narrow commercial targets and marketing objectives. The event provides a truly dynamic environment that acts as a catalyst for growth and at the same time sends a positive image of Greece to the world”, he added. Posidonia 2012 is sponsored by the Greek Ministry of Development, Competitiveness and Shipping, the Municipality of Piraeus, the Hellenic Chamber of Shipping, the Union of Greek Shipowners, the Greek Shipping Co-operation Committee, the Hellenic Shortsea Shipowners’ Association and the Association of Greek Passenger Shipping Companies.

The Posidonia 2012 Press Office is sponsored by Ernst & Young.

See live video from the presentations below:

Can Greece maintain its Global Dominance in Shipping?