Cooling down on Bodouroglou’s deck 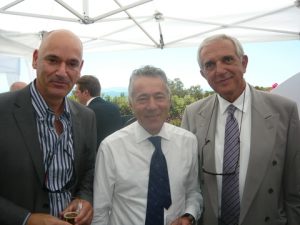 Despite last mid-week’s early summer heat wave, Michael Bodouroglou proved to his two-hundred guests that having a contingency weather plan is more than important. On the roof garden of his seaside premises, depicting a vessel’s bridge-deck balcony, Bodouroglou, his wife Helen and his colleagues  from Allseas Marine S.A., entertained us in ship-shape style. John Faraclas was there in full media gear…

Under the well positioned parasols and his bridge-level office, guests enjoyed the excellent dips, the hot cuisine, nice weather-cooling drinks, cocktails and live Saxophone tunes!  In analogy to other events, here one could see many ship-financiers and bankers, class societies’ top echelon officers, marine consultants and yes, journalists! 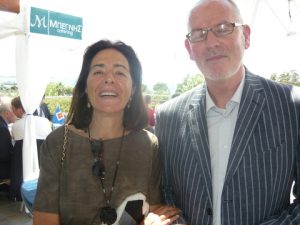 Who wasn’t there;  spotted George Xyradakis and his team from XRTC headed by Katerina Fitsiou with Dr. Ioannis Lagoudis being present too;  Dimitri Anagnostopoulos and Dimitri Mitrou from AB Bank; Corporate Social Responsibility’s expert lawyer Yanna Pavlopoulou, Marine Insurance specialist John Beloussis, Eurobank’s Lambros Theodorou and his son Nicholas – a willing to follow shipping young man! There was also Dr. Herman Klein, Managing Director of Blue Star Holding, one of the world’s biggest shipping groups and former head of GL, a good friend from the past too! The French trio from BV headed by Bernard Anne with Francoise Teissier and Bruno Dabouis; George Maghioros of Shipcare and close friend to our host; Xenophon Kritikopoulos from General Marine Spares and Repairs; Apo Poulovassilis from Lloyd’s Register, Dimitri Houliarakis from ABS; journalists Minas Tsamopoulos, Markos Kantzios and Lloyd’s List Nigel Lowry chatting financier Charlotte Stratou; academia moguls Manoli Kavoussanos from Athens Uni’s Economic faculty and ALBA’s Ilias Visvikis; Theo Xenakoudis from IRI with John Ramage ; all the above friends from the past of the writer – what a small world. 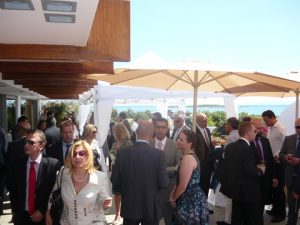 The towering Nicholas Vouyoukas from 3V Business Consultants was there too, NKK’s Dimitris Tsiftsis; Lawyer Fay Catsiba from Premium Consul  and many many others.  I mentioned above about meeting all my good old friends; hold your breath: there was Achilleas Stergiou my good old mate from our college days in Anargyrios and Corgiallenios College in Spetses, as well as Anastassis Gavrilides, another friend from the past, and Viedotel’s Nigel Cleave, a great supporter of our site, all three now associates with Bodouroglou’s headed shipping entities- very small world indeed. With these teams the “maxim” ‘Always at the helm aiming for excellence’ definitely works out miracles for Paragon and Box Ships!

Verdict: One of the best Posidonia 2012 gatherings!