Aspects of China Economy which I know

Now you might think that we exaggerate; no, not at all! This IMIF congregation surpassed in spirited participation even the one hosted back in February by the ITF for the IMO Secretary-general Koji Sekimizu’s presentation! Jim Davis, the IMIF’s chairman admitted that it was the biggest gathering that had taken place over the last five years – a strong contender having been “The credit crunch – who got hurt, how and why!” by Professor Tim Congdon CBE at the Baltic on November 12 2008 – as per my record book! Ah! this is John Faraclas reporting…

At Moore Stephens’ new offices off the Barbican, in the ground floor auditorium, IMIF’s delegates assembled in their droves. Our host: Richard Greiner, partner, Shipping Industry Group at Moore Stephens. Old and new “faithful” together; who wasn’t there or which company wasn’t duly represented hardly bears thinking about … Fifteen people came from the major international law firms in the City, Holman Fenwick Willan represented by Elinor Dautlich and Ince & Co by Tony Suchy being the largest ones.  RTI sent Les Champan and newcomer Lauren Kelly, who takes over from Mara Estefani – who is on maternity leave; Mara never missed an IMIF event! The Chamber of Shipping was duly represented with Mark Brownrigg and Angus Frew, the iconic Otto Norland; salvage supremo John Noble was there too and Matthew Marshall from Brit Insurance; ah! the banks had a strong presence with Citi, Deutsche Schiffsbank and RBS present; RBS deserved thanks, as it was Ling Zhou who recommended the speaker- an excellent choice!  Julie Clegg from Stephenson Harwood, as always was there as was  Anil Deshpande from Foresight, Ravi’s* group, FoB’s Sam Ignarski and many others; the list seemed endless… 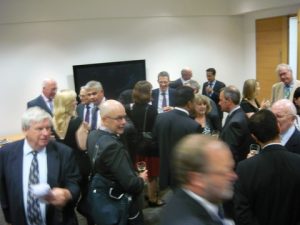 Networking at its best…

After a networking launch with excellent wine plus gateau superieur, we took our seats to hear the talk by Shicheng Yang (Simon Young) on “Aspects of China Economy which I know”.

IMIF chairman Jim Davis led off by stating: “We are all talking about China, and why not? They are having this amazing economic revolution.” China’s huge population ensured it was a vital market, and was served by many forward looking people. 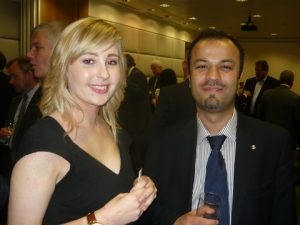 Mr Young, who since October 2009 has been Chief Executive for COSCO UK, spoke on a strictly private basis, and a pleasant discussion followed.

There was reference to Bicester, a shopping village north of London, as the epitomy of the interest of the more wealthy Chinese people  – as they outnumber any other country’s shopping visitors. I nodded that this was absolutely right! The speaker appreciated my “gesture” with a big smile!

There was considerable discussion, and Mr Davis drew the distinction between the Western business focus on the short-term, and the longer view taken by China, which was securing its interests by buying ore, in some instances by taking over the producers of ore and other minerals and energy projects in Australia, Africa, Canada, and elsewhere.

The meeting touched on the question of shipbuilding, which is a prime concern among members of IMIF. Under its five-year plan, the government in Beijing is placing emphasis on shipbuilding, as it provides a degree of employment to the population, including people migrating from inland areas. Yard capacity in China has been estimated at 16.5m dwt, a significant proportion of world capacity. Mr Davis stigmatises the global shipbuilding industry as “hopelessly big.”

In terms of opportunity and market growth, Mr Greiner noted that China was building the equivalent of a city for 20m people every year. 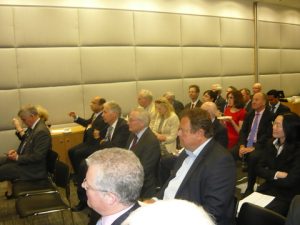 A view of the auditorium’s left wing…

It was clear that shipping people ought to be keeping a close eye on the property market in China, as a clue to demand and to prospective trends in the trade pattern, at a time when the target GDP rate of growth  for 2012 was still a steamy 7.5% after being officially reduced slightly.

Jim Davis expressed the thanks of the meeting to Mr Young, and to Mr Richard Greiner and all at Moore Stephens for yet another splendid welcome to an IMIF meeting.

My reflections: a lot more needs to be done in China to all intents and purposes. Having visited the country four times in 60 years, as well as having regular feedback, I believe that this Chinese approach of recent years to business, development and wealth if properly monitored will enable the Chinese people to keep a grip on success!