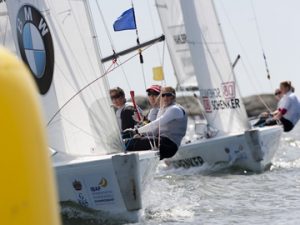 After the opening day of the 2012 ISAF Women’s Match Racing Worlds in Gothenburg, Sweden the early favourites have proven their worth and taken control. With a north westerly wind increasing throughout the day the conditions could not have been any better on Gothenburg as the sun shone down on the 16 competitors, including 10 of the 12 Women’s Match Race crews who will head to the London 2012 Olympic Sailing Competition.

In Group A there is a clear divide with four crews with 100% records and the other four without a race win.

The top four in each group advance to the Gold group and with the round robin concluding tomorrow the four crews with 100% records have one foot in the next round.

The results in Group B were slightly more varied with only Claire Leroy (FRA) and Silja Lehtinen (FIN) holding 100% records.

Lucy Macgregor (GBR) and Renee Groeneveld (NED) have two out of three race wins to their name whilst Tamara Echegoyen (ESP) and Rita Goncalves (POR) have just the one. Camilla Ulrikkeholm (DEN) and Silke Hahlbrock (GER) are yet to record a victory. ISAF Women’s Match Racing Worlds Microsite