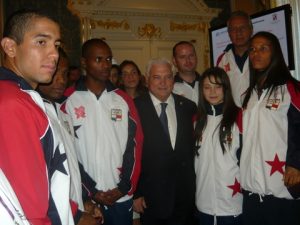 Ricardo Martinelli, president of Panama, saluted what he called “the real heroes” of the evening when friends of the Central American nation gathered in London’s West End to welcome his country’s eight-strong Olympic team.

“Everybody who is here is already a winner, ” said President Martinelli, handing over the national emblem to the leader of the team and the country’s only gold medallist, Irving Saladino, at a ceremony at Claridge’s Hotel. The reception was attended by representatives of leading sectors of Panamanian business, notably maritime registry and Canal operations, and London and international dignitaries and industry personalities. 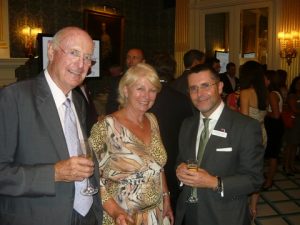 Ambassador to the UK, Ana Irene Delgado, expressed pride in Panama’s achievement in sending a total of eight athletes to the Games despite being one of the smallest countries, with a population of hardly 4m.

Irving Saladino thanked the government, Olympic authorities and the ambassador for their support and hospitality, on behalf of what he called “a superhero delegation who all will do their very best.”

Irving is world long jump champion, winning gold at Beijing in 2008. Another international star is Alonso Edward, who was 100 metres silver medallist in the 2009 world championships, behind the legendary Usain Bolt.

The team is sponsored by Cable & Wireless Communications, which has had a presence in Panama for many years. “We are very proud to invest in a nation of winners, ” said chief executive Tony Rice. He said that statistically, one person in 3m globally had a chance to win a gold medal. The firm showed a video profiling the team, with the title “Panamanians who are worth gold.”

Addressing the team, President Martinelli declared: “I know that you are the best, and we are going to show that to the world.”