75 years on, Cargotec’s MacGregor range of reliable, innovative technologies continues to provide shipowners and operators with unrivalled expertise and performance in the most demanding marine environments

“This year marks the 75th anniversary of MacGregor, Cargotec’s global market-leading brand in marine cargo handling and offshore load-handling solutions. Although much has changed since its foundation, it continues to provide customer-driven innovations to the marine and offshore markets. Today, half of the world’s oceangoing ships carry MacGregor equipment on board, “ says Pekka Vauramo, Executive Vice President for Marine. 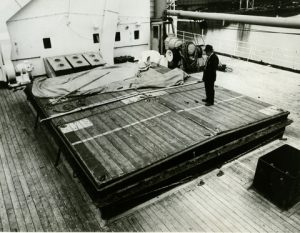 The MacGregor name made its first impression on the industry during the 1920s when engineer brothers Joseph and Robert MacGregor developed the first steel hatch cover in Whitley Bay in the north of England, and patented it in 1929. This was a success and MacGregor & Company was founded in 1937 to promote and sell the hatchcovers.   Through development, acquisition and merger, the MacGregor product range has grown continuously since then. In 2005 Kone acquired MacGregor International and later in the same year, Kone demerged and Cargotec was listed. Cargotec Corporation is the world’s leading provider of cargo handling solutions and in addition to MacGregor, has two other market-leading brands, Hiab and Kalmar. 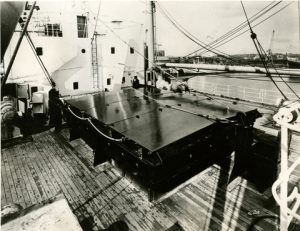 Some notable MacGregor milestones in the past twelve months include: the introduction of  the first fully automatic MacGregor twistlock, the CA8; winning Offshore Support Journal’s innovation of the year award for the MacGregor Chain Wheel Manipulator; establishing a new joint venture company in China, Rainbow-Cargotec Industries Co Ltd (RCI) to grow the company’s offshore MacGregor crane portfolio; and the introduction of a new range of electrically-driven offshore anchor handling/towing winches. 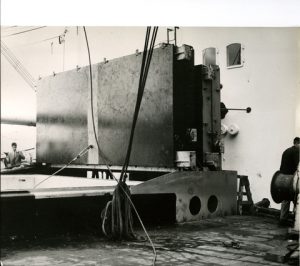 One of the first folding type hatch covers

Cargotec believes that the valueof its products and services is not confined to their ability to function well; it extends to their through-life performance, reliability and managed costs, achieved through quality assurance on a global scale. 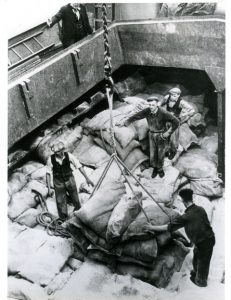 Break bulk handling in the past

As for the future, Cargotec aims to continue to grow, both in merchant marine and offshore business.

Cargotec improves the efficiency of cargo flows on land and at sea – wherever cargo is on the move. Cargotec’s daughter brands, Hiab, Kalmar and MacGregor are recognised leaders in cargo and load handling solutions around the world. Cargotec’s global network is positioned close to customers and offers extensive services that ensure the continuous, reliable and sustainable performance of equipment. Cargotec’s sales totalled EUR 3.1 billion in 2011 and it employs approximately 10, 500 people. Cargotec’s class B shares are quoted on NASDAQ OMX Helsinki under symbol CGCBV. www.cargotec.com