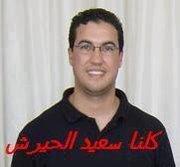 25 September 2012 – The ITF’s Maritime Roundtable began on an inspirataional note today in Casablanca, Morocco, when participants heard a live message from Said Elhairech, who was speaking from jail.  Said told the 200 delegates from 50 countries: “My body is incarcerated but my heart is with you and is free.” He thanked them all for their support and solidarity and hoped to see them in person soon. The audience reacted with a standing ovation and chants of “Free Said”.   With the full backing of all the attendees, the ITF is using the Maritime Roundtable (MRT) as a key tool for publicising Said’s innocence and demanding that the Moroccan authorities release him.   The conference opened with keynote speeches from ITF general secretary David Cockroft and ITF president Paddy Crumlin, plus guests from Morocco and beyond.

The MRT is a groundbreaking new three day activists’ forum that is building links between dockers’ and seafarers’ unions and helping shape the future of the ITF’s campaigning on flags of convenience. Alongside the activists and future union leaders attending there are a number of virtual participants who are joining the debates via the internet and live online reporting of the event at www.dockers-seafarers.org/event/maritime-roundtable.

A new website – www.dockers-seafarers.org – has been created to support the event and build on its achievements.