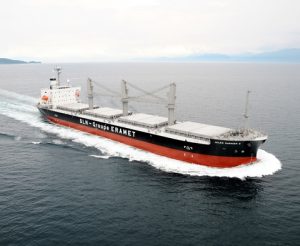 Tokyo – The world’s largest classification society ClassNK (Chairman & President: Noboru Ueda), announced that the world’s first specialized vessel for the carriage of Nickel Ore has been built and registered to the NK class.

The vessel, the Jules Garnier II, was built by Naikai Zosen Corporation and delivered to Japanese shipping major JX Shipping Co. Ltd on 19 September 2012, and is the first vessel in the world to be recognized as a Specially Constructed Cargo Ship for the carriage of Nickel Ore in accordance with the IMO’s IMSBC Code. The announcement followed a monthly meeting of the Society’s Classification Committee, which reviewed and officially certified the vessel’s registration on 22 October 2012.

Nickel Ore cargoes can liquefy during transport, drastically impairing the ship’s stability and safety, and these cargoes have been cited as the cause of four vessel casualties and the loss of 66 seafarers in 2010-11. INTERCARGO has since named Nickel Ore “the world’s most dangerous cargo” and efforts are underway at the IMO to strengthen the International Maritime Solid Bulk Code (IMSBC), which regulates the loading and transport of bulk cargoes such as Nickel Ore. The ISMBC code currently requires that the moisture content (MC) of cargoes that may liquefy be tested prior to their loading onboard ships, and forbids non-specialized vessels from loading cargoes with an MC greater than the specified Transportable Moisture Limit (TML).

However, questions have been raised about the testing procedures and validity of moisture content test results for Nickel Ore, and there is growing concern about whether nickel ore can safely be carried by standard vessels. While the ISMBC code allows for these dangerous cargoes to be carried by “Specially Constructed Cargo Ships”, no definition or requirements for such vessels are included in the code itself. In order to address this issue and ensure the safety of the world’s bulk carrier fleet, ClassNK began carrying out independent research on the physical characteristics of Nickle Ore in 2009. Based on this research, ClassNK developed the world’s first hull structure and stability requirements for building such “Specially Constructed Cargo Vessels” in 2011, and released them for use by the maritime industry as part of its Guidelines for the Safe Carriage of Nickel Ore in March 2012.

These requirements have since been approved by the government of Panama and Japan for use in vessels flagged with their administrations. They have further earned the recognition of INTERCARGO as well as the wider maritime industry, and ClassNK was presented with the “Safety Award” at the Lloyd’s List Global Awards in September 2012 for its contribution to the safe transportation of Nickel Ore. The 27, 200 dwt Jules Garnier II is the first vessel in the world to apply ClassNK’s new requirements in its construction and makes use longitudinal bulkheads in in its cargo holds to ensure stability and structural strength even when liquefied nickel ore cargoes are loaded.

The ship’s design earned the approval of the Panamanian government in September 2012, and with its completion in September 2012, is the first and currently only vessel to be certified as safe to carry liquefied Nickel Ore cargoes in line with the IMSBC code. The vessel is also the first to earn ClassNK’s new SCCS notation for safe carriage of nickel ore in recognition of its special construction Commenting on construction and registration of the vessel, ClassNK Operating Officer and Hull Department General Manager Mitsuhiko Kidogawa said: “With the completion of this vessel and the successful implementation of these new standards, we have realized an important step in our efforts to ensure the safety of vessels and their crews.”

“While this is an important achievement, we are continuing our research on nickel ore and other cargoes that can liquefy during transport, and we hope that we can develop methods for existing vessels to safely transport these dangerous cargoes, as well.” ClassNK’s Guidelines for the Safe Carriage of Nickel Ore are available free of charge on the ClassNK website www.classnk.or.jp (registration required). For more information please contact: ClassNK Hull

NGOs call on Bulgaria: don’t be an exporter of toxic ships