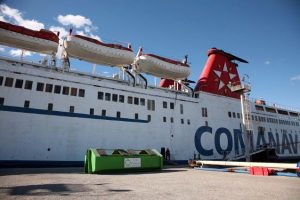 30 November 2012 – Mohamed Chamchati, the wrongly detained general secretary of the Moroccan merchant seafarers’ union, has been released from jail. He had been held for five months and asserted his innocence throughout. Like his colleague Said Elhairech, who was freed in October, Chamchati had been held on clearly mistaken charges linked to the cessation of operations of the Comarit-Comanav company.

ITF general secretary David Cockroft applauded the release: “We are gratified to see that the judicial authorities have finally come to their senses and realised that planning trade union action in defence of members’ jobs is no threat to the security of Morocco. We were very pleased that Said Elhairech was released just after our maritime meetings in Casablanca and was able to join our executive in Copenhagen, and we have continued to work behind the scenes for Mohamed Chamchati to receive the same treatment. We are very happy to see him free.”
ITF president Paddy Crumlin commented: “Mohamed’s supporters in Morocco will join all the dockers, seafarers and other transport workers and their unions internationally who have worked for his release, in welcoming this move. Like Said he was detained for nothing more than protecting jobs, a role that it falls to the Moroccan government to protect and defend. As with Said’s release, this is a good day for trade unionism and international solidarity.”
For the background to both cases please see www.itfglobal.org/solidarity/Said-Elhairech.cfm