Record attendance was noted at this year’s WISTA Hellas Annual Forum held at the Yacht Club of Greece on December 10th 2012.  The reason?  Besides the stellar panel, one of the hottest questions to be dared for discussion at an open forum in recent history, namely whether the Greek State and the Greek worldwide shipping sector could “pace together”?  An opportunity for the general Greek shipping community to have the State’s direct “ear” was provided by the WISTA Hellas forum, through the participation of the re-established Ministry of Shipping, Maritime Affairs and the Aegean and the attendance and participation of its honorable Minister, Mr. Kostis Moussouroulis.  With Manolis Vordonis moderating, the evening included presentations by EU Parliament member Mr. George Koumoutsakos by video, President and CEO of the Piraeus Port Authority George Anomeritis,   President and CEO of Danaos Corporation Dr. John Coustas, President and Managing Director of G.Bros George Gourdomihalis, Managing Director of Hellespont Shipping Corporation Alex Papachristides-Bove, Managing Director, head of Greek Shipping Citibank International Plc  Dimitris G. Vassilacos,   and concluded  with a special address by our very own Minister of Shipping, Mr. Kostis Moussouroulis.   This however, was not the end of the forum, with a heated and lively discussion following between the speakers and the Minister who remained on until the end  addressing the points raised. 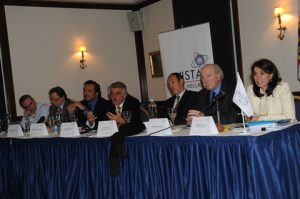 The bold topic provoked differing views among the speakers with messages of strong bonds between the State and shipping on the one hand and candid remarks on the history of inhibitive government measures that have shaped many decisions of the Greek shipowning community away from the State on the other.  There was no hesitation in describing restrictive measures and thick bureaucracy of the State in terms of Greek seafarer employment, Greek Flag registration and general regulatory framework that inhibit development and local investment in relation to Greek shipping.  While the discussion caused temperatures to rise and individual horror stories of Greek bureaucracy to fly, all participants maintained a healthy level of dialogue while expressing some directly oppositional opinions recognizing the value of the open opportunity to voice the issues in the hope of motivating a more realistic approach for future cooperation as was emphasized by Mr. Vordonis.Of course, such an open public “dialogue” could not have taken place without the participation of the competent governmental body. Mr. Moussouroulis, during his presentation, referred to the valuable resources the Greek shipping sector provides and thus emphasized the commitment of the State to support it in every way but also expressed his belief in a three way cooperation between the State, Shipowners and Seafarers.

Kostis Moussouroulis, Minister of Shipping,  Maritime Affairs and the Aegean at the podium

After patiently listening to what can be described as “passionate” statements and questions of both the shipowners on the panel as well as the distinguished audience, Mr. Moussouroulis, to his credit acknowledged with good humor, the need to face sometimes “hostile” audiences and expressed recognition of the mistakes of the past one of which he reminded all has already been rectified by the re-establishment  of the Ministry  as a result of which he assured the participants of the forum that all the issues raised were already being  evaluated.  He ultimately stressed though that such vital and fundamental change required will take time due to the need to first review in depth the regulatory structures in place. Was it thus coincidence? Evidence of this State effort?  Or perhaps the catalytic nature of the forum, that resulted in various announcements now being issued on revisions of regulations, including changes to requirements of seafarer training in Greece one of the issues which formed a part of the intense debate? 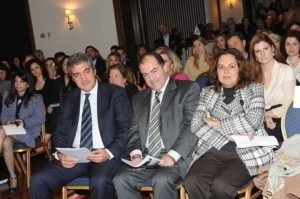 A view of the audience, and in the front row appearing on a l to r basis:: Kostis Moussouroulis, Capt. (HCG) Agisilaos Anastasakos, and Lt. Venetia Kallipolitou

The successful forum was followed by the traditional cocktail reception where participants and speakers were able to mingle, relax and enjoy the evening with food and drinks in hand which lasted well into the night.  Rea Metropoulou, President of WISTA Hellas commented, “While we (the WISTA Hellas Board) were very excited over the idea of this type of forum, we were also somewhat hesitant given the nature of the topic and the notion of having both State and the shipping community together on a panel given the obvious implications.  Ultimately, it proved that while the Greek shipping sector are very outspoken and very strong minded in their views, they recognized the forum for what it was, an opportunity to get a public direct line of communication which hopefully could motivate a more positive cooperation, one responsive to the needs of one of the only industries still managing to thrive in a global recession.”