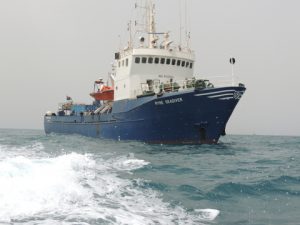 Ignoring the fact that all permits, licenses and clearances were in  place, the Nigerian Navy captured the Master and crew of fifteen Russian sailors  on the eve of their departure from the Port of Lagos.  Held for months in a bleak Lagos prison  without charge or trial, until recently when they were falsely accused of “illegal entry into the country” and “arms smuggling”, the sailors are now  threatened with life imprisonment by Nigerian prosecutors.

The behavior of the MV Myre Seadiver’s personnel throughout this  horrendous experience has been nothing short of exemplary. The vessel’s parent  company, Moran Security Group, her Master and her crew offered transparency and  meticulously complied with Nigeria’s regulations for private maritime security  providers.

Alexey Maximov, of Moscow-based Moran Security Group, said: “The fact  that our crew was forcibly removed from our ship at gunpoint in Lagos by the  Nigerian authorities – the very people you should be able to trust – and held  for months without charge is a total outrage.”

He continued: “I can clarify that the vessel called at the Port of  Lagos with all Customs paperwork in place and I possess all the appropriate  documentation for presentation.  A  declaration of the weaponry onboard was made clear in that paperwork in advance  of arriving at the Port of Lagos and the crew had valid Nigerian visas.  It is a fact that the crew boarded the  ship at the Port of Lagos AFTER flying into Nigeria through Lagos and entering  the country through the airport’s border control which they could not have done  without visas!”

The plight of the crew of the MV Myre Seadiver, as well as the  broader issue of Nigeria’s place in the international maritime community, are  being evaluated by government officials in Russia and other concerned nations,   as well as the International Maritime Organization.

An in-depth, unbiased blog by John Helmer chronicles the developing  events at http://johnhelmer.net/?p=8675 .

Following are irrefutable facts in this compelling  case:

Moran Security Group engaged the local Nigerian shipping agent, Blueseas Maritime Services, as the party  responsible for securing port authorizations permitting the MV Myre Seadiver’s  scheduled arrival in Nigeria’s Port of Lagos on September 19, 2012.  All fees associated with the agent’s  services were paid in full on a timely basis.

Blueseas Maritime Services applied for, and obtained, all requisite authorizations for the MV  Myre Seadiver to enter the Port of Lagos with a small stock of  arms.

The agent provided written confirmation to Moran Security Group that “The naval authorities are duly informed  of Seadiver’s arrival tomorrow.  There’ll be no issues.”  The agent added… “Further to  below, we received a call from the naval base informing us that while Seadiver  is at the anchorage, the Navy patrol boat on routine surveillance may likely  alongside for routine check.”

The MV Myre Seadiver’s Master recorded  “Permission is granted, proceeding to the  road of Lagos in accordance with instructions received from the  agent.”

The MV Myre Seadiver anchored in the Port of  Lagos.

In a surprise attack, seizing the MV Myre Seadiver, the Nigerian Navy  patrol apprehended and arrested the Master and the entire crew as they were  preparing to sail from the Port of Lagos.

A Nigerian Navy spokesperson, Lieutenant Commander Jerry Omodara,   claimed that “Preliminary investigations  show that the MV Myre Seadiver was laden with assorted weapons… There is no  indication that the vessel was authorized to come into Nigeria, and worse still,   to carry arms.”

After several months of imprisonment without charges, in harsh  conditions (including lack of drinking water), all crewmembers of the MV Myre  Seadiver were obliged to appear in Nigerian court.

During this court appearance, no charges were leveled by Nigerian  prosecutors.

Despite being in possession of visas duly issued by the Nigerian  Embassy in Moscow, the crew was charged with “illegal entry to the  country.”

Despite being in possession of written approval by the Flag  Administration to carry weaponry specific to the professional maritime security  objectives and itinerary, the crew was charged with “illegal possession of arms & ammunition.”  The inventory of  materials declared and approved precisely matched the inventory later seized  during the arrest.

Despite full compliance with International Maritime Organization  (IMO) resolutions governing the declaration of arms & ammunition (notably  the Master’s control of weaponry and safekeeping inside the vessel), the crew  was charged with “illegal importation of arms &  ammunition.”

Nigerian prosecutors stated that “Although an accused is presumed innocent  until proven guilty… We submit that the presumption of innocence is not absolute  or a magic wand”… and “the human right or individual right must be suspended  until the national security can be protected or well taken care  of.”

All fifteen MV Myre Seadiver crewmembers have been temporarily  released on bail to Russia’s ambassador in Nigeria.

The bond for the release of the MV Myre Seadiver vessel was set at  $500, 000 but the vessel is still in the custody of the Nigerian  Navy.

Nigerian prosecutors have called for life imprisonment for the entire  fifteen crewmembers.