The Eco battle will be fought as much with the existing fleet, warns Bibby boss 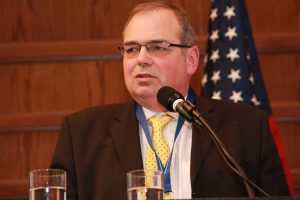 The Eco Ship revolution may be on the horizon but these new ships will not replace the existing fleet overnight and ship managers are under increasing pressure to come up with solutions to save ship owners money when it comes to fuel efficiency and operation expediency, according to Simon Barham, Chief Operating Officer at Bibby Ship Management.

While slow steaming is an option, it can put ship owners at an operational disadvantage and not running their ships’ engines at optimum speed in itself brings its own maintenance problems, he said.

“The eco ships are coming but they wont be here overnight. The existing fleet is relatively young and a high percentage of the vessels that are out there today are those which need to be managed efficiently. Can we manage existing ships more efficiently? Yes we can. We’ve seen already the SEEMPS ( ship energy efficiency management plan)- there are a lot of people who are offering SEEMPs off the shelf and not actually looking at what they can do for them as owners.

“There are other options and alternative methods of reducing down fuel consumption. For example, design modifications can be made in dry docks that improve a vessel’s overall performance. Slight changes in hull forms or optimising trim and the like will work on certain vessels but not on others yet the solution can also be something as straightforward as better weather routeing. Good shipmanagement can impact a voyage and can work to reduce any potential over expenditure on fuels, ” he stressed.

Managing ships is all about teamwork and you need to get the buy in across the board – especially from the guys onboard the ships. It is essential that that the Masters and the Chief Engineers understand what we are trying to achieve here.

However, according to the Bibby Ship Management COO, issues that need to be considered will be the ECAs and the cost-related ability of ships to switch fuel as they move in and out of these areas.

“As a lot of the existing fleet was built in the late 1990s or early 2000s, many will only have a couple of bunker tanks. They’re already carrying heavy fuel and light fuel and now they’re going to have to carry gas oil. There’s going to be a lot of conversions going on. There is a cost element involved there as well.

“As a word of warning are the savings actually to do with all the eco designs that are coming out?, Yes to a certain extent they are, but possibly not as much as some of the yards will want to make out and I for one am sceptical that all the promises of lower consumption will in fact become a reality . I believe that ship managers will play an important role in controlling consumptions not only on existing ships but also on the eco ships of the future, ” he concluded.