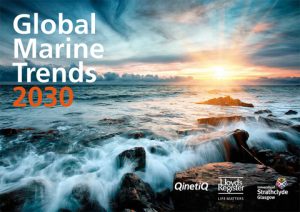 Report issued today at events in Singapore and London indicates strong growth for the maritime sector in the years up to 2030 and an even bigger role for China in the maritime world, as seaborne trade increases from 9 billion tonnes annually to between 19-24 billion tonnes.

Lloyd’s Register, Qinetiq and Strathclyde University today released Global Marine Trends 2030, a report based on two years of research into the future of the maritime industries.

The report indicates that 2030 could usher in a world where China would own a quarter of the merchant fleet. Almost half of offshore oil is taken from the deepest waters and there are 100 times as many offshore wind platforms. The tanker fleet grows the slowest of all the major ship-types and the number of containerships with a capacity that exceed 7, 600 teu grows three times faster than those below that threshold.

These are just some highlights in a vast report with insight into all key areas related to maritime.

The GMT 2030 team used three scenarios to model the future. These scenarios, using three key drivers – population growth, economic development and demand for resources – describe what maritime trade, sea power and the offshore energy sectors could look like in 2030.

The three scenarios are:

Status Quo – The world will continue its current growth momentum with some booms and busts over the next twenty years.

Global Commons – A shift to concern over resource limitation and environmental degradation will see a desire for a more sustainable world being developed and fairness in wealth distribution. Governments will find common ground and accelerated economic growth, within a framework of sustainable development, which will follow.

Competing Nations – States act in their own national interest. There will be little effort to forge agreement amongst governments for sustainable development and international norms. This is a self-interest and zero-sum world with a likely rise in protectionism and slower economic growth.

Richard Sadler, Lloyd’s Register’s CEO, said: “What is striking is that even in the most negative of the scenarios envisaged, maritime growth is strong.”

“For anyone looking for a future in an important sector, they have to consider maritime: whether for employment, investment or an understanding that without seaborne trade, offshore energy and naval power, the geopolitics of tomorrow will be highly fragile and quality of life precarious. The sea and its industries are vital for our global future.”

The report team also included disruptive factors that could radically alter the likelihood of the scenario results. But, barring cataclysmic change, the China factor will still be the big story in 2030. China, consuming three times-as-much oil as it does today and 60% of the world’s coal, will be the marketplace for maritime trade. The United States will, however, be the biggest consumer of natural gas and the report indicates, in a substantial section on naval power, that American military power on the oceans will remain pre-eminent.

Serodus to be listed on Oslo Axess Tuesday 9 April

If this is the truth then how come I am now the mother of a dead son after being left on board a crude oil carrying vessel Chinese owned using Honk Kong flag and all the other practices the or should I say some of the maritime industry,s use?? Being left on board for 6 days without correct medical care and not one brain thought he may have malaria even though they had been in malaria hotspots!!!! I believe you need to re look at just how much you really do look after your workers and deal with these terrible situations in the correct way and have supply,s ready and emergency practices in place for people like my son, an ex royal marine aged 26 protecting against piracy.