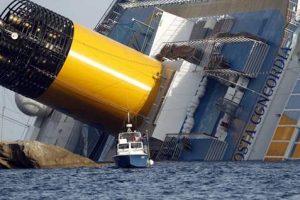 The Costa Concordia after the accident

Twelve months on from the Costa Concordia incident, a new Allianz report identifies that 106 ship losses were reported worldwide in the 12 months to November 25 2012 – up from 91 ships the previous year but a 27 percent decrease on the ten year average of 146 ships per annum. Despite this long term downward trend, driven by technology, training and regulation and a proactive response from the shipping industry to safety improvement, human error remains the core challenge.

In its annual ‘Safety and Shipping Review’ of maritime losses, marine insurer Allianz Global Corporate & Specialty (AGCS) highlights developments in shipping safety during 2012. The year was marked by two high profile accidents with the loss of the Costa Concordia off Italy on January 13th (the largest loss of the year at 114, 137 gross tons) followed by that of the ferry, Rabaul Queen, off Papua New Guinea on February 2nd, both causing multiple fatalities.

According to the report, foundering (sinking or submerging) was the most common cause of losses in the past year (49 percent) followed by wrecking or running aground (22 percent). Collisions such as that involving the Baltic Ace and Corvus J in early December 2012 accounted for a relatively small number of losses (6 percent).

With 30 losses reported, twice as many shipping accidents centered on the seas around South China, Indo China, Indonesia and the Philippines. Shipping losses also occurred more often in the East Mediterranean and the Black Sea (15 losses in 2012) or around Japan, Korea and North China (10 losses).

The report highlights that human error remains a root cause of most incidents. Fatigue, economic pressures, and inadequate training are causes for concern. Dr Sven Gerhard of AGCS explains: “For some commercial ship-owners, especially in the hard-pressed bulk cargo and tanker sectors, there is little money for maintenance and little money for training.” New regulation focuses on the problem of human error. The Maritime Labor Convention (2006), which comes into force later in 2013, will help improve safety by addressing the welfare and working conditions of seafarers. In general, passenger vessels have been the focus of attention throughout the year with both the International Maritime Organisation and the cruise ship industry taking action to tighten regulation and continuously improve operational practices.

Check and balance on the bridge

Major shipping companies have initiated self-regulation initiatives post-Costa Concordia, with the Cruise Lines International Association and the European Cruise Council partnering up to lead the industry-wide voluntary adoption of policies that go beyond international regulatory requirements. In addition, moves previously pioneered in other industries (such as airlines) or by leading ship-owners are gathering force: for example, greater adoption across the industry of the ‘function-based bridge’ concept whereby the bridge command structure changes from the traditional captain’s sole command towards a ‘check and balance’ approach. “We see such self-regulation of the industry as the core driver of safety”, says Gerhard, who believes that such concepts will soon trickle down to other sectors where passenger safety is paramount.

In addition, technological improvements such as the introduction of mandatory Electronic Chart Display and Information Systems (ECDIS) in July 2012 are expected to reduce accidents, but only where properly applied with effective training and management oversight. “Technology is only as useful as the training behind it – and we don’t always see this human element keeping up with other advances. What we do see with the best ship-owners is a proactive safety management culture, going beyond the minimum standards and running from top to bottom of the organization. This can really make an impact in improving safety”, Gerhard says.

AGCS is one of the world’s leading marine insurers, offering insurance cover for all types of modern shipping including tanker, bulker or container ships and passenger vessels, as well as yachts and pleasure craft. AGCS also offers cargo insurance, covering physical loss or damage to international and domestic goods in transit. In 2011, AGCS’s marine business generated over €940 million in insurance premiums (on a gross written premium basis).

So, what next for the markets and the unpleasant situations…