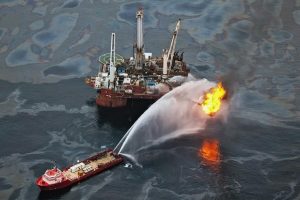 US offshore hydrocarbons exploration is safer nearly three years after the Deepwater Horizon disaster in the US Gulf of Mexico, members of the federal commission that had investigated the spill said Wednesday.

But while both industry and the US government deserve credit for making strides in improving safety and spill containment capabilities, even in the Arctic, Congress continues to get poor marks for not taking action, members said in their second report card on how recommendations from the National Oil Spill Commission have been followed. The commission was disbanded in March 2011 after issuing its report on the spill.

“Because of actions taken by the administration and by industry, we can say with confidence that offshore drilling is safer than it was three years ago, ” Bob Graham, co-chair of the commission and a former US senator from Florida, said in a statement. “That doesn’t mean that there will not be another incident; this is a risky business. But we do see real progress.”

The commission cited the industry’s quick action to develop sophisticated well capping stacks and containment devices that have been placed along the Gulf coast for use by companies in the event of a major spill. And the Obama administration has developed new regulations requiring safer drilling practices and independent review of safety plans.

“Not only is drilling safer, but the ability to respond effectively to spills that do occur has been significantly improved, ” said co-chair William Reilly, a former administrator of the Environmental Protection Agency under George H.W. Bush. “There are now four well capping systems located in the Gulf of Mexico and more than a dozen are positioned around the world. Three years ago there were none. Industry has taken to heart the lessons of the Deepwater Horizon disaster.”

In the grading system the members, who now call themselves “oil Spill Commission Action, ” unveiled last year, industry gets a B-, up from the C+ the group handed out a year ago. The Obama administration receives a B, the same grade it received last year.

Congress’s grade improved slightly, from last year’s D to this year’s D+. The group cited the passage of the RESTORE Act, which would give a significant portion of any damage awards from the spill resulting from BP’s Macondo well to aid restoration in the Gulf states — one of the commission’s recommendations.

“However, it did nothing about the many other critical issues the Commission identified to improve safety and environmental protection, ” the group said about Congress. “Further, we are concerned that the process established by the RESTORE Act may result in substantial delays and the diversion of large amounts of resources into purposes other than ecosystem restoration. However, giving Congress credit for at least implementing one recommendation, we have improved the grade from last year?s D.”

The group said more works needs to be done on ensuring adequate safeguards in the Arctic and in responding to spills in the Gulf that might result from exploration by Mexico or Cuba.