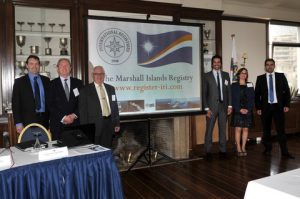 on the left: Simon Bennett, John Ramage and Radm Robert North and on the right: Theo Xenakoudis, Liz Bouchard and Thanos Theocharis

Following the presentation, a detailed and interesting discussion took place among the speakers and delegates. The seminar was developed to provide the shipping community with up-to-date information on topical issues and provide a forum by which to discuss these issues. “Maintaining an active dialogue with the Greek shipping community is important to the Registry and to Greek owners since they are the largest shipowning group in the RMI Registry. The recent report from the Greek Shipping Cooperation Committee also notes that the RMI flag remains one of the fastest growing flags in Greece, ” said Theo Xenakoudis. 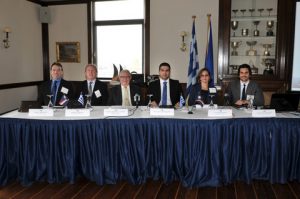 After the seminar in Piraeus, several Registry representatives traveled to London for the Marshall Islands Quality Council (MIQC) meeting. The MIQC is an independent consultative body consisting of more than 40 members who provide advice and guidance to the RMI Registry. “The MIQC assists the Registry in continuously improving the safety, security and environmental performance of vessels flying the RMI flag and the services provided to vessel owners, ” said Bill Gallagher, IRI President. The meeting agenda included a review of Registry statistics, an overview of the Registry’s Technical Department and how it is organized to respond to owner/operator requests on a 24-hour basis, an update on Regulatory issues including MARPOL Annexes V and VI and MLC, 2006. Also during the meeting, Takis Koutris, Managing Director of Roxana Shipping SA and Kristen Marine S.A., was announced as the Chairperson for the RMI Blue Water Vessel (BWV) Advisory Group. “The objectives of the BWV Advisory Group are similar to those of the MIQC however the forum will solely concentrate on issues related to and affecting blue water vessels, ” continued Mr. Gallagher. “Mr. Koutris has been highly involved in the working groups at Intertanko, Intercargo and Martecma, and is actively engaged in issues impacting blue water vessels. We are delighted that an individual of Mr. Koutris’ caliber will lead this group, ” continued Mr. Gallagher. 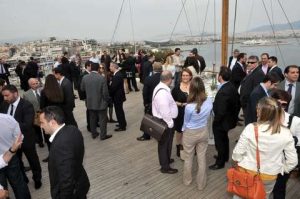 Following the MIQC meeting, guest speaker Dirk Steffen, Director of Consultancy for Copenhagen-based Risk Intelligence gave a presentation on Piracy in West Africa – Practical Aspects of Security in the Gulf of Guinea to MIQC members and other industry stakeholders in the greater London area. “Dirk’s presentation reiterated the importance of staying aware of recommended strategies to combat piracy and to stay on top of daily guidance provided to owners/operators when transiting in this area as things are changing rapidly, ” said John Ramage, Chief Operating Officer.

About the IRI and its affiliates

International Registries, Inc. and its affiliates (IRI) provide administrative and technical support to the Republic of the Marshall Islands (RMI). In 2012, the RMI Registry grew 13% in terms of gross tons (GT) from the year prior which is slightly higher than the Registry’s five year average growth rate of 11%. Hellenic-based tonnage represents 21% of the RMI fleet. It is anticipated that Hellenic-based owners/operators will contribute an additional five million GT to the Registry in 2013.  The RMI Registry is ranked as the third largest registry in the world. By the end of the first quarter of 2013, the Registry stood at 2, 854 vessels and nearly 92 million GT.

The RMI is the only major open registry to be included on the White Lists of both the Paris and Tokyo Memorandums of Understanding (MoUs) and to hold Qualship 21 status with the United States Coast Guard (USCG) for nine consecutive years. The RMI is also listed on the Low Risk Ships list within the Paris MoU’s New Inspection Regime.

IRI has a network of 25 worldwide offices in Baltimore, Dalian, Dubai, Ft. Lauderdale, Geneva, Hamburg, Hong Kong, Houston, Imabari, Istanbul, Long Beach, London, Mumbai, New York (midtown and downtown), Piraeus, Rio de Janeiro, Roosendaal, Seoul, Shanghai, Singapore, Taipei, Tokyo, Washington, DC/Reston and Zurich, that can provide assistance on the registration of a vessel, recordation of a mortgage and financing charter, incorporation of a company and other client related services.  In order to meet higher expectations, IRI has expanded its worldwide coverage to include representation in Chile, Limassol, Oslo and Port Said.  IRI concentrates solely on administering the RMI flag and provides a broad spectrum of registry related services for the shipping and financial services industries.

Marie Ghisi and her Venetian Mask