Drilling for and producing gold in the tropical jungles of Guyana, Toronto-listed junior company Sacre-Coeur claims to have “a business model that works – even in this market environment.” Its properties in the South American nation, known before 1966 as British Guyana, are providing a stream of production to allow the company to fund growth through debt.

Sacre-Coeur president and chief executive Gregory Sparks is referring to a resources sector background in which some juniors have discovered multi-million ounce deposits but cannot afford to develop them.

“Our business model differs significantly from those of our junior resources peers, ” he told an investment specialists’ meeting in London, “in that we have current production and enhanced cash flow, which enables us to leverage our way forward without reliance on further equity issue and dilution to shareholders. This is probably our biggest single advantage.”

The company raised just under C$1m in September/October 2012, in what is expected to be its last such placement to raise working capital. Mr Sparks went so far as to speak of his board’s “aversion” to the equity route. Instead it has turned to the bond markets: in January 2013 the company achieved gross proceeds of just over US$6.1m in a gold denominated bond issue, and is considering in the third quarter of this year either a gold bond issue or streaming arrangement for $33.5m to finance hard-rock development for production.

It has a wholly-owned 860 sq km land position and, said Mr Sparks: “We have a large pipeline of projects on which we have initial encouragement, and one is ripe for short-term development.”

Guyana has a legal system based on its past associations with Britain, and politically “the mining environment is unusually hospitable to business.  The government is very mining-friendly, ” Greg Sparks reminded his City audience. Gold accounts for 60% of the country’s exports by value, a substantial percentage of its gross domestic product, and is the largest employment sector. Mr Sparks has worked on the Guyana Shield for 17 years and sees no likelihood of the country becoming greedy towards mining companies: “I have never seen any indication of that. They truly seem to understand the notion of not killing the goose that lays the golden eggs, if you will pardon the cliché. The short answer is that I do not think there is a lot of risk, at least relative to a lot of other developing countries.” 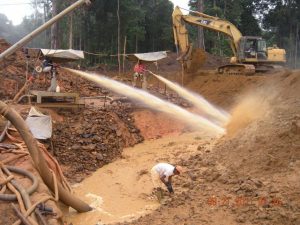 Sacre-Coeur, which has a market capitalisation of $11.5m, is generating its cash flow from producing gold from its large inventory of alluvial deposits near Million Mountain, and furthering exploration along this 20km structural trend. In what it calls its zone nine it has drilled 10 scout holes so far, yielding indications of significant gold mineralisation. Its mines are mercury-free, avoiding the big problems resulting from artesanal working in some third world countries.

There is also potential for a world-class hard-rock deposit, but it is unclear what can be done about this because the major gold companies are not currently in buying mood. So Sacre-Coeur is concentating on affordable developments.

The company employs nearly 100 people, mainly Guyanese, who earn some $50 per 12-hour day – six and a half days a week, for six weeks in camp; and then two unpaid weeks off. Individual employment contracts, as opposed to labour union contracts, are in place.

Largest shareholder is the Russian giant steelmaker Severstal with 13%, under its strategy of acquiring gold positions in various parts of the world.

Sacre-Coeur says that it is reducing operating risk by generating revenue from many low-cost, producing projects. Several other junior exploration companies are active in this bush area. Its alluvial output is about to be more than doubled – courtesy of some of the proceeds from bond financing, the addition of a second production unit and process improvements – to between 5, 000 and 7, 000 ounces  a year, reducing cash production costs. Capital cost of the second production unit, including shipping and installation, is put at C$435, 000.

A regulatory-compliant hard-rock resource at 451, 000 ounces together with additional drill holes is expected to provide a total of at least 500, 000 ounces. Hard-rock production at a rate of 38, 000 ounces a year is targeted for the third quarter of 2014.

Mr Sparks has had 40 years in the mining sector, including an earlier senior position with Echo Bay, and provided services for many majors including Tenneco Oil Company, Homestake, and Coeur d’Alene Mines.

Life and Death in Pompeii and Herculaneum

COP26: the time for promises is over

Christmas comes early for retailers as fears about...

I know that gold hasn’t been one of the most stable investments lately, but it still has apperciated about 500% since 2001.