Growth and expanding horizons as the AAA welcomes new members 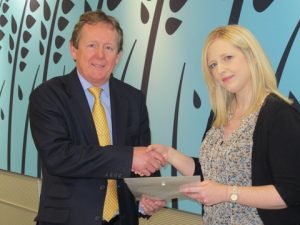 Keith Jones welcoming Amy O’Neill as a Fellow of the Association of Average Adjusters. She is one of only two female Fellows.

The Association of Average Adjusters (AAA) reported a successful year at its annual general meeting today, with a big growth in the number of people taking part in its activities and an expansion of its international footprint.

The AAA welcomed 21 new associate members from ten different countries, bringing the total number to 92. For the first time in its history, the AAA admitted two associates to its managing body as part of a move to open up to younger up-and-coming professionals. It also acquired a new Fellow, Amy O’Neill of Richards Hogg Lindley, after she passed her final exams.

According to Chairman Keith Jones, the AAA is seen as an international focal point and is looking to increase its accessibility. “I have had meetings with associations and individual adjusters from many different countries, and was struck by the goodwill towards our association. The huge increase in the number of people from all over the world attending our annual meeting and dinner, to levels not seen for many years, is testimony to our continuing role. We are seeking to make our expertise and services more accessible on an international basis, ” he said.

A recent seminar held in London was recorded on video, and will be made available via the new association website, which is expected to go live during the summer. If successful, the video will be repeated for future events.

Mr Jones was elected Chairman for another year.