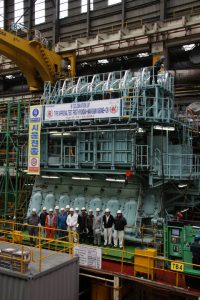 The new G-type pictured at HHI-EMD in Korea

At the end of April, 2013 in Korea, MAN Diesel & Turbo’s latest G-type engine passed its Type Approval Test at HHI-EMD, the engine and machinery division of Hyundai Heavy Industries. The ultra-long-stroke G60ME-C9 engine went through its paces under the watchful eye of many interested observers, including representatives from the major classification societies.

Christian O. Rasmussen, Head of Classification Business, MAN Diesel & Turbo, praised the collaboration between his company and HHI-EMD and said: “Our 600-mm bore engines have enjoyed much market success because of their reliability. The new G-type continues this legacy, as confirmed by the successful TAT here in Korea.”

He continued: “The G60 engine represents the culmination of many years’ development work. In these uncertain times for the shipping industry, MAN Diesel & Turbo sees significant opportunities arising for G60 as fuel prices continue to rise.”

MAN Diesel & Turbo reports having close to 200 G-type engines on order, spread over a broad spectrum of applications and a number of different licensees – with HHI-EMD leading the field – and states that it has the fastest market acceptance any engine series in the MAN B&W portfolio has ever received.

The engine is due to power a tanker owned by Istanbul-based Densa Tankers, the international ship management and chartering company specialising in oil and chemical tankers. The vessel will be managed by Thome, the Singapore-based provider of global, integrated ship management services.

MAN Diesel & Turbo’s G-type programme entered the market in October 2010. The G-types have designs that follow the principles of the large-bore, Mark 9 engine series that MAN Diesel & Turbo introduced in 2006. Their longer stroke reduces engine speed, thereby paving the way for ship designs with unprecedented high-efficiency.

G-type engines’ longer stroke results in a lower rpm for the engine driving the propeller. This lower optimum engine speed allows the use of a larger propeller and is, ultimately, significantly more efficient in terms of engine propulsion. Together with an optimised engine design, this reduces fuel consumption and reduces CO2 emissions.

MAN Diesel & Turbo SE, based in Augsburg, Germany, is the world’s leading provider of large-bore diesel engines and turbomachinery for marine and stationary applications. It designs two-stroke and four-stroke engines that are manufactured both by the company and by its licensees. The engines have power outputs ranging from 450 kW to 87 MW. MAN Diesel & Turbo also designs and manufactures gas turbines of up to 50 MW, steam turbines of up to 150 MW and compressors with volume flows of up to 1.5 million m³/h and pressures of up to 1, 000 bar. The product range is rounded off by turbochargers, propellers, gas engines and chemical reactors. MAN Diesel & Turbo’s range of goods includes complete marine propulsion systems, turbomachinery units for the oil & gas as well as the process industries and turnkey power plants. Customers receive worldwide after-sales services marketed under the MAN PrimeServ brand. The company employs around 15, 000 staff at more than 100 international sites, primarily in Germany, Denmark, France, Switzerland, the Czech Republic, India and China. MAN Diesel & Turbo is a company in the Power Engineering business area of MAN SE.