ITF calls for urgent investigation into THY ‘missing crew’ claims 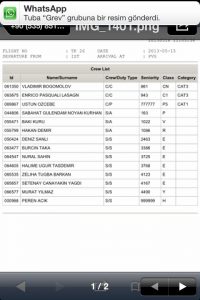 The ITF (International Transport Workers’ Federation) is calling on international aviation authorities to investigate allegations that Turkish Airlines (THY) is playing with safety by flying airplanes with insufficient or unqualified crew in order to get around a strike by THY workers protesting at unfair sackings.

The Hava-Is union, which represents THY workers, went on strike on Wednesday over the company’s failure to reinstate unfairly staffed workers and negotiate over rest periods. It has alerted the ITF to the reported attempts by THY to circumvent the strike. It believes THY is running several flights at below its own set crewing levels and has provided documentary evidence in the form of crew lists for two such flights, TK40 (an A340) from Istanbul to Capetown via Johannesburg on 16/5/2013, which shows a total cabin crew of only seven rather than the eight THY’s rules demand for. In a second case, flight TK26, a 777 flying from Istanbul to Shanghai on 16/5/13 had a full complement of eight cabin crew, but this was achieved by using a cabin crew member who was not yet qualified for such a flight, only holding a certificate for A340s, not 777s. 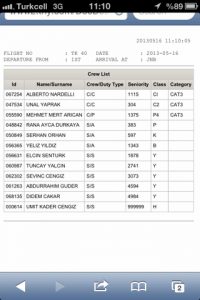 ITF civil aviation section section secretary Gabriel Mocho stated: “These are serious allegations. They suggest an urgent need for the civil aviation authorities in THY destination countries to check what is going on on the flights arriving and leaving their jurisdictions. Safety cannot be compromised.”

For more about the reasons for the strike please see www.reinstate305.org