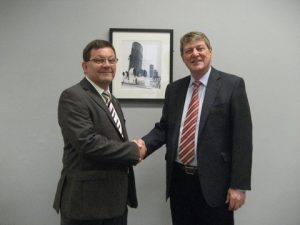 Carson McMullan succeeds Steve Parker as the National Chairman of the trade association for UK freight forwarders, with Fred Osborn becoming Vice Chairman.
Since 1996, McMullan has been managing director of All-Route Shipping (NI) Ltd, which recently became part of the Woodside Group. He has been BIFA’s Vice Chairman for the past two years.
New Vice Chairman, Osborn has been the Co-Owner of X-Pand International Freight Ltd since 2000.
He was previously Chair of BIFA’s Air Policy Group and joined the trade association’s Board in 2011.
Sir Peter Bottomley, MP, has also agreed to extend his term as BIFA President.
In addition, John Stubbings, Group Director and Company Secretary of the Woodland Group, has been elected to serve on the BIFA Board. John is currently Chair of BIFA’s Legal and Insurance Policy Group.
BIFA Director General Peter Quantrill comments: “We are very pleased that Sir Peter has agreed to continue in office. BIFA benefits from his political acumen and significant experience of the legislative process across the parliamentary spectrum.
“In welcoming Carson, Fred and John into their new roles, I would also like to express my appreciation for the contribution made by Steve Parker during his two-year tenure. Like Steve; Carson, Fred and John have a broad range of external interests, and very wide experience at ‘the coal face’ helping to run their respective freight forwarding businesses. I’m certain that BIFA and its members will benefit from their appointments as National Chairman, Vice Chairman, and Board Member, respectively.”
Freight
0 comment
0
FacebookTwitterLinkedinEmail