Greece’s cumbersome, complex and constantly changing legislative and regulatory frameworks in the pleasure boat segment and lagging marina infrastructure cost the country billions in lost tourism revenues each year according to speakers at the 2nd Posidonia Sea Tourism Forum, which concludes in Athens today.

The annual revenue to the Greek economy from all types and segments of pleasure boat activity is in the region of Euro 600 million, which is equal to the revenues Spain receives just from the operations of the very large yachts measuring over 25 metres.

According to George Gratsos, President, Hellenic Chamber of Shipping, there is also a distinct disparity between Greece and other Mediterranean countries in terms of the number of people who own boats and the available marina infrastructure.

“With 16, 000Kms of coastline and 1, 200 islands, Greece has just 14, 400 mooring places compared to France’s 226, 000 mooring places across a coastline of a mere 6, 300kms. In Greece, we have one pleasure boat for every 621 people when in Europe the average is one for every 164 and this is due to the hostile Greek tax code which is extremely unfriendly to yacht owners, ” said Gratsos. 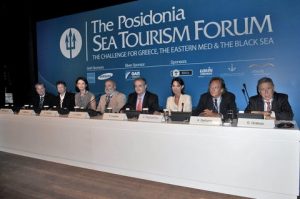 Representing the Greek government at the panel discussion which was held under the title Commercial Yachting in the East Mediterranean, was the Secretary General of Greek National Tourism Organisation, Panos Livadas, who said that much is being done to help the sector realize its full potential.

“Greece is focusing on the growth of the yachting industry and we are already taking measures designed to reform the industry by lifting red tape restrictions and by ensuring the seamless inter-ministerial cooperation which is necessary, ” said Livadas.

However, the industry does not seem convinced about the length to which the Greek government is willing to ‘sail’ in order to lift the cabotage which is still prevalent in the waters of Greece’s commercial yachting sector. 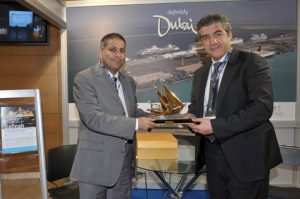 “Development plans for a total of 15 new marinas are awaiting permits for years and piers and other existing facilities are in badly need for repairs but permits are not forthcoming as bureaucracy reigns, ” insisted Gratsos.

Toby Maclaurin, President of MYBA, an organization representing large yacht owners, added a different dimension to the debate by raising the issue of the complete lack of harmonization on the tax regime applied by European Union countries which makes it difficult for operators to invest in the sector, thus inhibiting growth in a very lucrative sector.

“According to an independent study conducted by the London School of Economics, large yachts and pleasure boats operating in the Med countries of Spain, Italy, France and Greece contribute a staggering Euro 4.6 billion to the local marinas’ economies, ” he said adding that this segment has grown employment by an average of 10 per cent annually for the last five years bucking all national trend. He argued that by adopting a more liberalized, transparent rational and just tax regime and by removing restrictive barriers to trade, large pleasure boats would greatly increase their turnover and further contribute to the local economies.

Gratsos seconded him: “Make things simple for people to understand, ” he said. “In Greece we have a total of 17, 700 pleasure boats and yachts which are responsible for the direct and indirect employment of 40, 000 people.

“If we had more friendly laws and if the government ever decides to grant massively delayed permissions for the development of new marinas and the upgrading of existing ones, we would be able to increase our berth capacity by 10, 000 places and create 30, 000 new jobs, ” he added.

Mirko Wollrab to head the communications division at HSH Nordbank