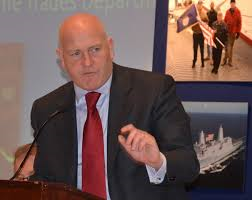 The ITF (International Transport Workers’ Federation) has reiterated its and its member unions’ continuing concern over the unacceptable lockout of workers at the Port of Vancouver, Washington State, USA.

The Federation laid out its views on the dispute in a formal complaint to Masami Iijima, president and CEO of Mitusi Limited, which owns United Grain Corporation, the company at the centre of the lockout.

The International Transport Workers’ Federation (ITF) is a global federation of about 700 transport trade unions with a collective membership of over 4.5 million workers. The International Longshore and Warehouse Union (ILWU), which represents workers at the Mitsui owned United Grain Corp. in the Port of Vancouver, Washington USA, is a key affiliate of the ITF’s Dockers’ Section.

I am writing to you because the ITF and its affiliates are deeply concerned that the ILWU’s members have been locked out by Mitsui’s local management for nearly three months now – since 27th February 2013 – and there does not appear to be any sign of a willingness to return to good faith bargaining with the union to resolve this dispute, which is deeply damaging to both Mitsui’s business and reputation.

We understand that the company justified the lockout of its entire ILWU Local 4 represented workforce on the basis on an accusation against a single union worker of damaging equipment.  ITF unions consider this to be an unnecessarily heavy handed action.  Concerns about the conduct of employees or health and safety issues should be addressed through proper, transparent processes and negotiation, not used to punish workers on the ground.

The circumstances in which this action took place – following the failure to agree a new contract, and Mitsui-UGC’s unilateral imposition of concessionary terms after Local 4 members rejected the company’s final offer in December – also raise questions over the company’s willingness to bargain in good faith.  Reports of the use of non-union replacement workers at the terminal add to our concern.

Mitsui is of course one of Japan’s top conglomerates with an international standing and reputation.  The ITF is aware of Mitsui’s corporate social responsibility policy and the fact that the company has pledged its support for the Global Compact championed by the United Nations.  We now urge you to demonstrate that the company takes its responsibility towards its global workforce seriously by resolving the dispute in the Port of Vancouver without delay.

The ILWU has represented grain handlers since the 1930’s in Vancouver, Tacoma and Seattle, Washington, and in Portland, Oregon.  The men and women who work at the Port of Vancouver are simply seeking to negotiate contracts that do not undermine their working conditions, and that allow them to have decent standards of living for their families.  You are no doubt aware that the union has managed to reach an agreement with Cargill and CHS’ TEMCO terminal.

Given the seriousness of the situation, the ITF urges you to intervene in this matter to end the lock-out at the Port of Vancouver immediately, and to ensure that the management of UGC returns to good faith bargaining with the ILWU with a view to achieving an acceptable agreement.

We await your response and hope that we will be able to report positive developments on this matter to the many ITF unions who are following the situation in the Port of Vancouver with growing concern.

The ITF is also making a formal complaint to Marubeni, a second Japanese conglomerate which operates a grain terminal in the Pacific Northwest, and which has taken aggressive action against workers.