Christian Ludwig – Head of Retrofit & Upgrade – MAN Diesel & Turbo, said: “Slide fuel-valves have proved to be very popular within the marine, two-stroke market. Really, it’s a case of having introduced the right technology at the right time and the slide fuel-valve’s strong market performance is testimony to the fuel savings and increased environmental profile it brings to working vessels. It is important to note that slide fuel-valves improve the low-load operating capability of engines.”

Slide fuel-valves come as standard on all new MAN B&W engines but can also be retrofitted on MC engines. The slide fuel-valve eliminates the so-called ‘sac volume’, which reduces fuel-oil consumption and, furthermore, eliminates dripping from the fuel-valve nozzle.

Compared to conventional valves, the slide fuel-valve has NOx-reduction potential. The reduced sac volume leads, by nature, to an improved combustion process, resulting in fewer deposits throughout the gas ways and a reduction in overall emissions, such as HC, NOx and particulate matter. Furthermore, visible smoke conditions are also greatly reduced as a result of the improved combustion.

Conversely, engines fitted with slide fuel-valves have, due to improved low-load performance with regard to soot formation, a significant advantage in an era where ‘slow steaming’ (sailing at part load) has become the industry norm. This reduces/eliminates the need to run at high revolutions in order to clean exhaust channels.

The procedure for replacing standard valves with slide fuel-valves is straightforward and can be carried out by ship personnel after instruction or MAN PrimeServ as required. Fitting the new valve type brings many benefits to the table, including:
• Improved low-load performance
• Better combustion process
• Reduced fouling of gas ways and exhaust-gas boiler
• Reduced fouling of piston top land
• No drips – no sac volume
• Less visible smoke formation
• Lower HC, NOx and particulate matter emission levels 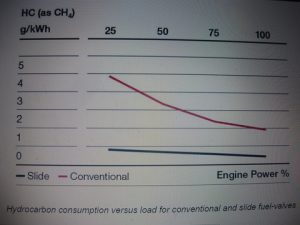 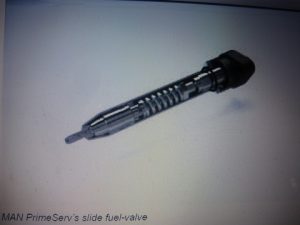 MAN Diesel & Turbo SE, based in Augsburg, Germany, is the world’s leading provider of large-bore diesel engines and turbomachinery for marine and stationary applications. It designs two-stroke and four-stroke engines that are manufactured both by the company and by its licensees. The engines have power outputs ranging from 450 kW to 87 MW. MAN Diesel & Turbo also designs and manufactures gas turbines of up to 50 MW, steam turbines of up to 150 MW and compressors with volume flows of up to 1.5 million m³/h and pressures of up to 1, 000 bar. The product range is rounded off by turbochargers, propellers, gas engines and chemical reactors. MAN Diesel & Turbo’s range of goods includes complete marine propulsion systems, turbomachinery units for the oil & gas as well as the process industries and turnkey power plants. Customers receive worldwide after-sales services marketed under the MAN PrimeServ brand. The company employs around 15, 000 staff at more than 100 international sites, primarily in Germany, Denmark, France, Switzerland, the Czech Republic, India and China. MAN Diesel & Turbo is a company in the Power Engineering business area of MAN SE. Ref. No.: 6510-0318