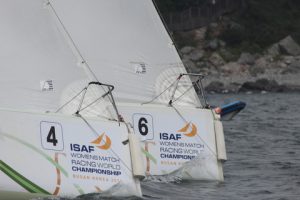 Sunday 9 June 2013- Tamara Echegoyen (ESP) has reached the final of the ISAF Women’s Match Racing World Championship 2013 in Busan, Korea after an extraordinary performance in the regatta, winning every match so far.

The other finalist will either be Ekaterina Skudina (RUS) or Camilla Ulrikkeholm (DEN) who will conclude their semi-final on Sunday morning.

After defeating Kiwi Claudia Pierce 3 – 0 in their quarterfinal, London 2012 gold medallist Echegoyen continued her winning streak by beating Katie Spithill (AUS) with the same figures in their semi-final.

The Spanish crew has now raced undefeated all the way to the final of the ISAF Women’s Match Racing World Championship 2013 in Busan, the second event of the inaugural Women’s International Match Racing Series. However, the semis showed some extremely close and thrilling racing, with the crowds at the Haeundae Beach cheering the sailors’ exhilarating manoeuvres.

With an undefeated run Tamara Echegoyen is unsure whether she can line up another string of victories in the final matches, “That’s of course what we’re aiming for. But the very tight racing against Katie showed that we have to always look out, and take nothing for granted, ” Echegoyen declares.

As the Race Committee today moved the course closer to shore and the beach full of spectators, the buildings and a small hill affected the wind, and the strategic game on the course became even more difficult than in the previous days of the event, “The conditions were rather puffy and a little shifty, and you always had to look around out of the boat, also keeping a close eye on the other boat, ” Echegoyen explains.

Katie Spithill, back on the match racing scene after her maternity leave with six month old daughter Chloe, wasn’t too sad after losing the semi-final, “I feel that as a team we did really well today, even though we lost. We had some close racing and it was very exciting, but there were also a few umpire calls that didn’t go our way, ” the Australian sailor smiles.

“We never expected to go to the semi-finals, but after a good morning against Anna we were there, ” she says, referring to the quarterfinals against Swedish Olympian Anna Kjellberg.

The other semi-final, sailed between Ekaterina Skudina of Russia and Camilla Ulrikkeholm from Denmark, is 1.25 – 2 in the Danish team’s favour after a brutal collision on the second upwind leg in their fourth semi-final match.

Skudina tried to clear a penalty she had received in the pre-start, but as she bore away to gybe for her 270-degrees turn, she misjudged the amount of room she had and collided violently with Ulrikkeholm.

In addition to losing the match, the umpires deducted 0.75 points from Skudina’s scorecard for the damage caused. The first crew to reach three points will advance to the final, meaning that Skudina has to win another two matches but Ulrikkeholm needs just one more victory.

“We had some very tough and close races today. In the first one we caught the first wind shift and were in front at the first top mark rounding, then stretching out further and winning, ” Ulrikkeholm says.

“The second and the third matches went to Skudina, despite our good starts, when she found some good shifts and got so much ahead that we couldn’t reach her, ” Ulrikkeholm continues, looking forward to the conclusion of the semi-finals, and, hopefully, a ticket to the final matches.