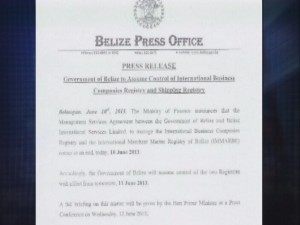 IMMARBE and the I.B.C. registry have been privately and profitably run since 1991. The government is likely to justify its takeover for the blacklisting of Belize by the European Commission for illegal, unreported and unregulated fishing by international vessels known to fly the Belizean flag.

But in an economy that has been shelled by serial nationalizations since 2009, this latest move is bound to cause investor confidence to further plummet.

It will also certainly unleash another round of expensive litigation and increase government liability for companies which they nationalized including Belize Telemedia Limited and Belize Electricity Limited for which compensation has not been paid to its previous owners.