Naming Ceremonies for “Ever Legend”, “Ever Learned” and “Ever Legion” 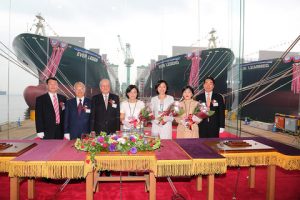 June 11, 2013—Evergreen Line’s latest three L-type vessels, numbers 12, 13 and 14 in the series have been named Ever Legend, Ever Learned and Ever Legion. The christening ceremony was officiated by S.S. Lin, the Evergreen Group’s First Vice Group Chairman, at the Samsung Heavy Industries shipyard in Korea today. The official rope-cuttings of the new 8, 452-TEU vessels were performed by Ms. Chung, Teh-Mei, (Chief Executive Director of Chang Yung-Fa Foundation), Ms. Liou, Meng-Fen (Group Executive Officer, Secretariat, of Evergreen Group) and Ms. Liao, Hsueh-hui, (Group Executive Officer, Personnel, of Evergreen Group). The ceremony was attended by dignitaries from Taiwan, Korea and other nations.

To celebrate this grand event in particular, Samsung Heavy Industries invited the Evergreen Brass Band, part of the Evergreen Symphony Orchestra (ESO) to perform live. This is the first time that the ship yard had arranged such a performance at a naming ceremony. The stirring music enhanced the ceremonial atmosphere of the event tremendously.

The three L-types will join Evergreen Line’s Asia – Europe services replacing older vessels, which will be cascaded to other trades by the end of June. The L-type vessels enable Evergreen Line to further strengthen its competitiveness. Eleven ships of this type are currently in operation and are achieving an efficient sailing performance, maintaining stable schedules, which helps to secure customer support. In addition, their fuel-efficient design enables a reduction in operating costs and enhances their service performance.

With the specific aims of upgrading and renewing its fleet, Evergreen Group commenced its new shipbuilding programme in 2010 with an order for 20 L-type vessels from Samsung Heavy Industries. In 2011, a further 10 vessels of the same specification were ordered from CSBC Corp., Taiwan with the first ship scheduled to be delivered from this ship yard in August this year. Eighteen of these thirty newbuildings are expected to be delivered by the end of 2013.

As far as future musical performances are concerned, Samsung Heavy Industries have invited the Evergreen Symphony Orchestra to perform three concerts at Gangdong Arts Center in Seoul, at Tongyeong Citizen’s Center in Tongyeong city and at Busan’s Citizen Hall.