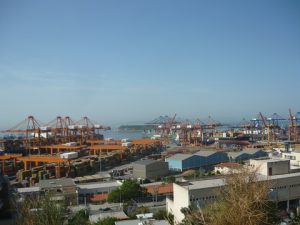 14 June 2013 – The first ever major international study of health and safety in global network terminals is being published today. Conducted by Cardiff University and commissioned by the ITF (International Transport Workers’ Federation), it has been conducted in cooperation with three of the world’s biggest terminal operators: PSA International, APM Terminals, and one other company.

The 94 page report – Managing the health and safety of workers in globalised container terminals – can be see at www.itfglobal.org/infocentre/pubs.cfm/detail/39726 and examines six global network terminal (GNT) ports as well as a worldwide survey of ITF member unions. It finds that, despite the major changes associated with containerisation, container terminals remain a high risk environment for dock workers. It concludes that although the GNT operators have made some important strides in improving health and safety management systems, significant improvement is needed in order to bring container terminals up to the standards of best practice found in other sectors where worker participation systems are effectively developed. The report lays the groundwork for an even wider and more comprehensive second study, that again is being conducted with the co-operation of PSA International; APM Terminals, and another GNT operator.

Sharon James, ITF dockers’ section secretary, commented: “This is an important, first-of-its-kind project. We commend these three leading GNT operators for cooperating with this research. By engaging in an independent assessment of their performance, these companies are showing leadership for the wider container terminals industry.”

ITF president Paddy Crumlin added: “The findings show that the GNTs have made some important steps to improving their health and safety importance, but there is still a good way to go. This report lays out guidance on what can be done to enshrine and spread good practice.”

A PSA International corporate spokesperson stated: “At the heart of PSA lies a strong, unwavering commitment to provide our people with a safe, secure and healthy workplace and to promote sustainable development in the communities we operate in. We recognise that the improvement of safety at PSA is a journey and as an industry leader, we will continually upgrade our health, safety, security and environment (HSSE) practices and performance and strive to be an exemplary corporate partner on HSSE matters”

Martin Poulsen, head of global safety in APM Terminals, who also operates as the ‘safety activist’, stated: “As a leading port operator we are fully committed to constantly developing and refining our safety management systems and working closely together with our employees as well as organisations such as ITF. We fully agree with the report findings that marine terminals are a high risk environment and that constant research and improvement must take place to ensure that all dock workers can return home from work safely every day.”

The research recognises the ongoing progress on health and safety made by GNTs and recommends that these can be built on in the following areas:

• Current health and safety systems are largely of the behavioural type (top down, rule-based). Evidence from other industries demonstrates that OHS (occupational health and safety) can be strengthened by worker participation systems, which can address the underlying causes of health and safety problems;
• There needs to be greater attention given to ensuring that OHS provisions and outcomes are equal for sub-contracted workers;
• OHS management systems in terminals in the Global North and Global South differ greatly in how they are applied;
• Current OHS management systems are focused on safety and should pay more attention to health issues such as musculoskeletal disorders and fatigue.

The following are the initial conclusions contained in the executive summary of the report:
There is a widely accepted notion that the transformation of dock work by containerisation and the changes that have taken place in its ownership, with privatisation and the subsequent emergence of a small number of major global operators with large scale global interests in the establishment of global terminal networks, has led to significant improvement in the implementation and operation of arrangements to manage health and safety and prevent harm to dockworkers globally. The available data on injuries in container terminals appear to support this notion by suggesting a broadly downward trend in many regions. However, as we have pointed out, the limitations of this data are such that this, on its own, cannot be taken as robust evidence of an improving pattern overall. The study also identified a number of examples of good practice in relation to OHS management systems and practices. For example, there are indications of much to be gained from sharing experiences between terminals; so the practice adopted by the GNTs globally for sharing OHS information among the terminals is therefore to be commended and it is recommended that it be extended wherever possible. It is further evident that the GNT operators have acted responsibly and proactively in adopting health and safety management systems, and that these have resulted in significant improvements in OHS management and performance.

However, the study’s findings are also suggestive of several areas of concern. These include the emergent risks associated with restructuring, reorganisation and intensification of work; the adequacy of arrangements and support for preventive occupational health (as opposed to safety); and the increased vulnerability of contract workers in advancing economies. In addition, the findings pointed to an over-concentration of managerial attention on behaviour- based safety management systems, leading to possible consequent oversights in the provision of support for preventive occupational health; as well as weaknesses in arrangements for consultation and representation on health and safety matters. These are recognised weaknesses of this type of safety management system which evidence from other industries suggests has limitations, especially in the extent to which it is able to address work-related health issues, fragmented worksite management created by outsourcing of tasks on the same worksite, such as were particular features of our advancing economy case studies, as well as low levels of useful representation of workers’ interests in health and safety and consultation on new and emergent risks. Further areas of concern identified by the study included limitations in the reach of regulatory inspection and in the reliability of reporting systems for injuries, fatalities and especially for work-related ill-health. Differences between experiences in terminals operated in advanced and advancing countries were apparent in many of these areas.

Overall, our findings suggest both that: GNTs have taken significant steps in advancing health and safety management and performance; and also that they have very substantial potential to do much more to effectively protect all those working in terminals. Similarly, while they have introduced practices from which those in other sectors can learn (in particular in relation to the sharing of experience and information), they can also further improve practice by themselves following the examples of others – in particular in relation to both: participative OHS management systems and practices; and the exploitation of their position as supply chain leaders for the improvement of OHS management by supplier organisations.

BIFA polishes up the silver for 25th Freight Service Awards 2013