MAN Diesel & Turbo is to supply eight engines for the diesel-electric propulsion of two cruise ship newbuildings to Fincantieri Cantieri Navali Italiani S.p.A., world leader in cruise shipbuilding. The company is delivering the engines in cooperation with Alfa Laval who will supply accompanying exhaust-gas-treatment systems (PureSOx) for sulphur-oxide removal.

Each cruise ship will be powered by 2 × MAN 9L32/44CR + 2 × MAN 12V32/44CR engines, providing a combined output of 23, 520 kW in a diesel-electric propulsion arrangement. The engines will operate with MAN Diesel & Turbo’s well-proven, state-of-the-art, common-rail injection system, suitable for both heavy fuel oil and distillate fuels. This technology, developed in-house by MAN Diesel & Turbo and fully optimised for its engines, provides superior performance in terms of fuel consumption and smoke emissions, especially at part-load. 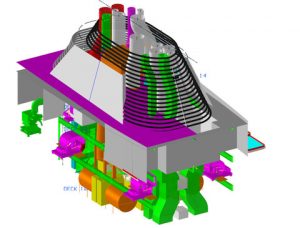 Sokrates Tolgos – MAN Diesel & Turbo – Head of Cruise & Ferry Sales said: “We feel extremely honoured to have won Fincantieri, the world’s largest cruise shipbuilder, as a new customer for our engines in this high-added-value market segment. Fincantieri’s and Viking Ocean Cruises’ confidence in realising such a technologically leading and innovative cruise project with MAN Diesel & Turbo and Alfa Laval, our consortium partner, signals a new era of cooperation. We consider it an historical step for our future growth in the cruise and ferry business.”

Tolgos continued: “By combining MAN’s efficiency-leading 32/44CR engines with the PureSOx exhaust-gas-treatment system, these super-luxury cruise vessels can fulfill the increasingly stringent global requirements for permissible sulphur-oxide emissions in the most economical manner possible. This especially applies to the demanding limit of 0.1% sulphur fuel equivalent in Emission Controlled Areas (ECAs).”

The two new vessels are bound for Viking Ocean Cruises, sister company of Viking River Cruises, the world’s leading river-cruise line. With a total passenger capacity of 936 and a crew to passenger ratio of approximately 1:2, the ships are destined to serve the segment demand for small, super-luxury vessels. Delivery of the two newbuildings to the ship owner is scheduled for early 2015 and early 2016, respectively.

PureSOx Alfa Laval’s PureSOx system removes over 98% of sulphur oxides from a ship’s exhaust gas through washing it with seawater (open-loop system), or freshwater (closed-loop system), or a combination of both (hybrid system). This cost-saving solution enables vessels to comply with strict International Maritime Organization (IMO) regulations by using heavy fuel oil instead of expensive, low-sulphur marine gas-oil.

Because of the typically stringent space requirements that exist for technical equipment aboard cruise ships, the more compact ‘multiple inlet’ PureSOx system design has been chosen where the exhaust gas from each engine pair is cleaned in a single PureSOx system.
Fincantieri and Viking Ocean Cruises decided to employ the closed-loop PureSOx system using fresh water with caustic soda as a reducing agent. The cleaning system will accordingly be able to handle the requirements of any port and permits the cruise vessel to operate in low-alkalinity waters such as estuaries or the Baltic Sea, or other such, sensitive areas around the world.

About MAN Diesel & Turbo
MAN Diesel & Turbo SE, based in Augsburg, Germany, is the world’s leading provider of large-bore diesel engines and turbomachinery for marine and stationary applications. It designs two-stroke and four-stroke engines that are manufactured both by the company and by its licensees. The engines have power outputs ranging from 450 kW to 87 MW. MAN Diesel & Turbo also designs and manufactures gas turbines of up to 50 MW, steam turbines of up to 150 MW and compressors with volume flows of up to 1.5 million m³/h and pressures of up to 1, 000 bar. The product range is rounded off by turbochargers, CP propellers, gas engines and chemical reactors. MAN Diesel & Turbo’s range of goods includes complete marine propulsion systems, turbomachinery units for the oil & gas as well as the process industries and turnkey power plants. Customers receive worldwide after-sales services marketed under the MAN PrimeServ brand. The company employs around 15, 000 staff at more than 100 international sites, primarily in Germany, Denmark, France, Switzerland, the Czech Republic, India and China. MAN Diesel & Turbo is a company in the Power Engineering business area of MAN SE. Ref. No.: 6510-0319
All data provided in this press release is for information purposes only, explicitly non-binding and subject to changes without further notice.