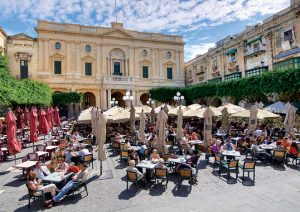 A former airline pilot will stress at Interferry’s 38th annual conference that safety depends on recognising the potential for human error rather than pursuing ‘the myth of perfection’.

The trade association event takes place in Malta from October 5-9 with an agenda dominated by safety issues.

Insights on how the aviation industry builds and maintains safety culture will come from special guest speaker Jarle Gimmestad of Norway-based operational safety consultancy Gimmestad AS.  He was previously with Scandinavian airline SAS as a captain and then as human factors and crew resource manager, which included working with the accident investigation group.

Pointing to the continuously improving safety record of air travel, he notes: “There is a significant tendency – while undesired events used to be caused by technical insufficiency, we now realise that most are contributed by human error.  We have left the myth of perfection.  Human error is a natural part of human behaviour.  It’s the downside of having a brain.”

Mr Gimmestad suggests that other industries can also benefit by focusing on this ‘admittance of error’ and three further factors driving airline safety initiatives:

A plea for efficient cooperation between regulators and industry will mark the keynote address by Christian Breinholt, deputy director-general of the Danish Maritime Authority and chairman of the IMO Maritime Safety Committee.

“Each side has its own specific role to play but there is an overlapping responsibility in optimising the shared regulatory framework and ensuring correct compliance, ” he warns. “The key to satisfying all stakeholders is timely efforts and contributions backed up by sufficient evidence, experience and knowledge. The industry-side’s early contributions may yield robust results – but examples of less fruitful attempts at influencing the IMO agenda do exist.”

Their think-tank follows a session on damage stability, which includes analysis of the technical challenges specific to ro-pax vessels by world-leading academic Dracos Vassalos, professor of maritime safety and director of the ship safety research centre at the UK’s Strathclyde University.

He will outline how the introduction of probabilistic, goals-based regulations in place of a rules-based approach prompted a fundamental change in addressing ship design and operation – allowing vessels to be built with a known safety level for the first time in maritime legislation history.  But as he will point out: “This newly gained knowledge and freedom enabled the designer and the regulator to delve deeper and to become wiser – and this has brought to light quantifiable indications of the vulnerability of ro-pax ships in the damaged condition.”

Prof. Vassalos will also highlight examples of dangerous practices during operation, a ‘box ticking’ approach to the ISM and lack of preparedness for emergencies.

Another session will feature innovations for ferry safety in developing countries.  Leigh McCue-Weil, associate professor in the aerospace and ocean engineering department at Virginia Tech, US, will demonstrate two mobile technology applications relating to small craft motion and vessel drills.  Initially created for commercial fishermen, the tools have attracted industry-wide interest and could be adapted for ferry use.

Zanzibar-based journalist Rachel Hamada, editor of the culture and travel magazine Mambo, will explain a mobile phone check-in system that monitors if a vessel is overloaded and also provides passengers with data on vessel condition, suitability for the route and expected weather.  She and a technology expert conceived the ‘Usizame – Do Not Drown’ system in response to two recent ferry disasters off Tanzania that cost 2, 000 lives.  They are now seeking funding to develop the project for implementation both locally and elsewhere.

An international student competition to design safe, affordable ferries will be described by Roberta Weisbrod, founder and principal of New York-based consultancy Sustainable Ports, chair of the US Transportation Research Board’s ferry committee and coordinator of Interferry’s involvement in a joint initiative with the IMO to improve ferry safety in developing nations.  The competition was launched by the Worldwide Ferry Safety Association – formed to further Interferry’s work on the safety project – and the winners will be announced during the Malta conference.

Among other conference topics, the latest environmental challenges will be explored in a session on emissions and efficiencies.  This will cover a combined batteries and scrubbers solution being investigated by Scandlines, a report on using methanol fuel from Stena RoRo, a performance-enhancing new bow form developed by Rolls-Royce and a study by the Green Ship of the Future partnership.

This year’s conference will also be notable for reducing the number of presentations and placing more emphasis on panel debates.  In addition to the safety discussion, this will include panels on the critical issues and opportunities for both large and small operators, featuring a global line-up of chief executives.