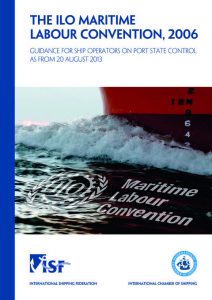 The International Chamber of Shipping (ICS), whose member national shipowners’ associations negotiated the text of the ILO Maritime Labour Convention (MLC), has issued advice to shipowners to help them pre-empt port state control problems when the Convention enters in force, next month, on 20 August.

The advice – contained in a brochure which can be downloaded free of charge via the ICS website – explains the measures that port state control officers are entitled to take, which initially will vary from country to country depending upon the date when the port state ratified the Convention.

ICS Secretary General, Peter Hinchliffe explained: “The enforcement mechanism is new and is complicated by the fact that the MLC does not actually require flag states that have ratified the Convention to issue certification immediately. The ILO Diplomatic Conference which adopted the MLC in 2006 also adopted a Resolution agreeing that port states should take a pragmatic approach to enforcement for the first 12 months following entry into force worldwide. But it is still rather unclear how this will be applied in practice. Shipowners should therefore take sensible precautions.”

Mr Hinchliffe added: “Regardless of the progress which may or may not have been made by a vessel’s flag state, ships are required to meet the standards in the Convention. Our brochure therefore seeks to explain the current situation and the measures that operators might take to demonstrate compliance, even if they have not yet been issued with MLC certification.”

An important part of PSC enforcement will be the Declaration of Maritime Labour Compliance (DMLC), a part of which requires companies to complete themselves for each of their ships, and which should serve as prima facie evidence that the ship meets MLC standards.

ICS therefore recommends that companies prepare, for all their ships, a DMLC Part II before20 August, in order to minimise potential difficulties should their ships be subjected to PSC enforcement under the MLC.

In the event that the flag state has not yet ratified the Convention, or has not yet issued ships with a DMLC Part I containing details of the national requirements with which ships should demonstrate compliance, ICS suggests that companies should nevertheless prepare a DMLC Part II for all their ships – even if this has to be adjusted once the flag state is ready to issue guidance. ICS suggests that companies can refer to the model contained in the ‘International Shipping Federation (ISF) Guidelines on the Application of the MLC’ which were produced by ICS last year.

ICS also recommends that ships carry evidence to show they have contacted their flag state requesting inspection for compliance with the MLC and the format required for the completion of the DMLC.

Mr Hinchliffe remarked: “It is incumbent on flag states, even if they have not yet ratified the ILO Convention, to provide ships with a DMLC Part I as soon as possible as well as detailed advice to shipowners about preparing the DMLC Part II and the particular national format and content that may be required. Our hope is that port states will indeed take a pragmatic approach, as requested by the ILO Conference. But ship operators should not take this for granted and should ensure that they are prepared for global entry into force as far as possible.”

The ICS brochure can also be downloaded free of charge at: