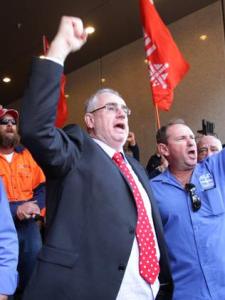 Charges against Bob Carnegie have been dropped

The ITF is welcoming the dismissal of charges against Australian trade union and community activist Bob Carnegie.

Carnegie was facing 18 charges brought against him by construction firm Abigroup relating to his involvement in a nine week strike by 600 workers at the Queensland Children’s Hospital site between July and October 2012.

All these charges have now been dismissed by Brisbane Federal Circuit Court.

ITF president and national secretary of the Maritime Union of Australia Paddy Crumlin said: “This is a big relief for Bob and his family in particular and the wider trade union and civil rights movement more generally.

“It goes to show that community and labour activists with courage and determination can protest unjust and unfair actions by powerful political, industrial and corporate elites, even when faced with threats of personal financial ruin and even jail time to shut them up.”

Carnegie still faces a civil suit brought on by the Lend Lease subsidiary.

Crumlin continued: “I want to thank every person who understood that Bob’s struggle was also theirs, along with MUA members in particular who helped out Bob through his legal struggles. I understand there were hundreds of supporters from diverse community areas gathered outside of the court to ensure justice was served.

“It seems the company is not happy with the magistrate’s decision and wants to continue their witch-hunt. We call on them to stop this corporate bullying and hectoring, accept the judicial determination and re-evaluate the failure of their internal governance and corporate policies which will bring them into great disrepute if persevered with.

“The Maritime Union of Australia and the International Transport Workers’ Federation along with other fair-minded people in Australia and internationally will continue to show our solidarity and support Bob and his family in any event.”