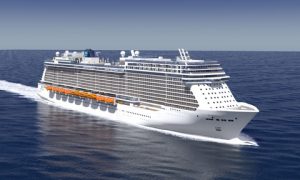 Graphic rendering of the Breakaway Plus vessel (courtesy Meyer Werft)

MAN Diesel & Turbo has won the order from Meyer Werft for new cruise vessels for Norwegian Cruise Line to supply its V48/60CR engines with diesel-electric propulsion systems. The ships will be built at Meyer Werft, the cruise liner specialist builder in Papenburg, northern Germany. Norwegian is a longstanding customer of MAN Diesel & Turbo with almost its entire fleet powered by the 48/60 and 58/64 engine types.

The new ships – accorded the project name ‘Breakaway Plus’ – will be the largest in Norwegian’s fleet. At 163, 000 gross tons and approximately 4, 200 passenger berths, the vessels will be larger than the previous 146, 000 gross ton Breakaway-class ships ordered at Meyer Werft in 2010, but will incorporate many of those vessels’ unique design elements and innovations.

The Breakaway Plus vessels will each be powered by five engines – 2 × 14V + 3 × 12V48/60CR Tier II types – capable of delivering 76, 800 kW, compared to the four driving the Breakaway-class ‘Norwegian Breakaway’ and ‘Norwegian Getaway’ vessels. The five engines will operate with MAN Diesel & Turbo’s well-proven, state-of-the-art, common-rail injection system that is suitable for both heavy fuel oil and distillate fuels. This technology, developed in-house by MAN Diesel & Turbo and fully optimised for its engines, provides superior performance in terms of fuel consumption and smoke emissions, especially at part load.

Breakaway class
The newest member of the Norwegian fleet, Norwegian Breakaway, entered service at the end of April 2013 and features a 2 × 14V + 2 × 12V48/60CR Tier II engine configuration with 62, 400 kW of installed MAN power. With accommodation for 4, 000 passengers and New York as home port, the cruise ship will sail to Bermuda for the summer and the Bahamas and Caribbean in the winter.
Construction of Norwegian Breakaway’s sister ship –‘Norwegian Getaway’ – is well underway with delivery scheduled for January.

Sokrates Tolgos, Head of Sales Cruise & Ferry, MAN Diesel & Turbo, said: “With this new order, we are extremely pleased to continue our long-standing relationship with

Norwegian and Meyer Werft, both of whom have always been innovative with high demands for quality standards and professionalism from their suppliers. Norwegian pioneered the concept of Freestyle Cruising offering guests the freedom and flexibility to enjoy their cruise vacation on their own terms. Furthermore, it was the first company to introduce MAN 48/60 common-rail technology into its operating fleet six years ago. Ever since, all its MAN powered newbuilds have been ordered with the fuel saving electronic CR injection system.”
Tolgos concluded by saying: “Our company’s firm approach of risk-controlled introduction of new technologies into the market is bearing fruit. This is fully in line with the very high safety, reliability and environmental standards we encounter in the cruise business, where the parties involved strive not only to meet but even to exceed the level required by regulation wherever possible.”

About MAN Diesel & Turbo
MAN Diesel & Turbo SE, based in Augsburg, Germany, is the world’s leading provider of large-bore diesel engines and turbomachinery for marine and stationary applications. It designs two-stroke and four-stroke engines that are manufactured both by the company and by its licensees. The engines have power outputs ranging from 450 kW to 87 MW. MAN Diesel & Turbo also designs and manufactures gas turbines of up to 50 MW, steam turbines of up to 150 MW and compressors with volume flows of up to 1.5 million m³/h and pressures of up to 1, 000 bar. The product range is rounded off by turbochargers, propellers, gas engines and chemical reactors. MAN Diesel & Turbo’s range of goods includes complete marine propulsion systems, turbomachinery units for the oil & gas as well as the process industries and turnkey power plants. Customers receive worldwide after-sales services marketed under the MAN PrimeServ brand. The company employs around 15, 000 staff at more than 100 international sites, primarily in Germany, Denmark, France, Switzerland, the Czech Republic, India and China. MAN Diesel & Turbo is a company in the Power Engineering business area of MAN SE.