A show of hands made it clear: members of WISTA-UK at the association’s grand annual debate insisted it was right for people to push hard for more environmentally-friendly shipping.

They did this by rejecting overwhelmingly the motion:  This house believes that the demands for ever-greener shipping are so much hot air.

At its 2013 forum, at Portcullis House, Westminster, WISTA-UK, which is part of the Women’s International Shipping & Trading Association, was continuing its tradition of staging stimulating industry debates led by top speakers.

Moderator Jim Davis, chairman of the International Maritime Industries Forum and a WISTA-UK Ambassador, set the scene for the discussion by averring that shipping had been unfairly characterised as a major polluter, “but I do not think it is anywhere near – think of the number of cars in this country alone.”

The debate centred on whether pressure for new regulations and specifications for vessels and engines had got out of hand – and columnist Michael Grey, proposing the motion, was certain that they had.  Mr Grey condemned the “Insatiable nature of the green agenda.”

He spoke of a sinister implication that shipping was not environmentally sound and had been “put on earth principally to pollute, ” a view that had registered with significant armies of campaigners. Only last year, the UK parliamentary select committee on energy and climate change came to “the wonderfully wise conclusion that shipping is the most polluting industry on this planet. “

The views of these parliamentarians were clearly shared by those wanting to flog wind turbines, along with the environmental lobbies, said Mr Grey. “I believe that it is one of the great injustices that the shipping industry never gets any credit whatsoever for its environmental improvements, which throughout my working life have been spectacular, ” together with the efforts of IMO to make the industry cleaner and greener, and the success of the Marpol annexes in helping dramatically reduce year on year amounts spilled at sea. “Yet the environmentalists howl for more to be done.” Going beyond reasonable and proportionate environmental measures would increase shipping costs hugely and force traffic back to the roads. “It is economic pressures that are making ships more efficient all the time.”

Mr Grey was concerned about how so-called eco-ships would cope with their “underpowered engines – just wait until the storms blow them on the shore.” Such ships, like the low powered steamers of another era, could be very dangerous for those who sail in them.

Citing the election of the anti-carbon tax Coalition parties in Australia, and the report of two Brussels commissioners “acknowledging the terrible harm being done by climate change regulation, ” Mr Grey said: “I think at long last the zeitgeist might be changing.”

Opposing the motion, John Faraclas of www.allaboutshipping.co.uk declared: “Let me assure you that our industry is the best, and whatever we have been accused of is nonsense.  We are improving, second by second.  Whatever they say against us is all pure nonsense.

“We (international shipping) contribute only 2.7% of world emissions of carbon dioxide. We are far ahead of the rest of industry. Shipping is two things: money and seafarers. Money helps us build ships, and every day we are relying on our seafarers.” He did concede, though, that “society wants us to do many things that are not achievable.”

Defending the motion, Dr Anne-Marie Warris, head of ecoreflect (a new company focusing on sustainability in the maritime and other industries) called for a responsible attitude from other parts of the supply chain besides shipping.

“How can we talk about green shipping when we do not talk about the majority of the charterers, who in the main choose the cheapest ships? Company executives talk about sustainability, but what do they do when they hire a ship?”

Dr Warris continued: “It still takes far too long after a ship is unloaded to get the goods to the consumers. Only so much can be achieved by shipowners without a change in the business model. We need a new business model, but are not talking honestly about what might change the model.”

It took 25 years to pay back the cost of a ship, based on pretty good charter rates.  “That is not a lot of incentive.” The press wrongly thought of the business model as based on a few well known owners, but in fact there were many small owners:  40% of the total fleet of tankers have a single owner per ship.

Regulations had to take into account the complexity of linkages, said Dr Warris. There was no evidence of holistic thinking.

Speaking against the motion, Katharina Stanzel, managing director of Intertanko and WISTA-UK Personality of the Year 2012, said that knowing her marine biologist background, independent tanker owners had chosen to appoint her because they believed greener shipping is inevitable.

Such owners had spent 30 to 40 years improving their performance, and the charterers did not care, said Ms Stanzel.  Most of the owners had a long term view, and many were the third generation in the business. They were looking for responsibility in the environmental field. “It is they who are pushing for new engines. They go and push technology forward. Without these visionaries, our society would not do so well.” She summed up: “Demands for greener ships and greener shipping are a natural evolution.”

Mr Davis said that one way of addressing the environmental problems was to slow the ships down, describing some shipping operations as “a series of projectiles.” 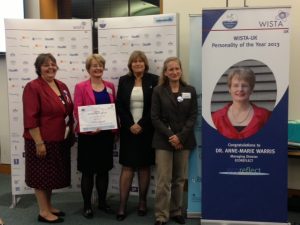 Following the debate, it was announced that Dr Warris had been chosen as WISTA-UK Personality of the Year 2013.

Dr Warris said that she owed a lot to Tom Boardley, marine director of her previous employer Lloyd’s Register, for giving her the chance to work in the classification society’s marine division. “If he had not given me the opportunity, I would not have been able to work in this fantastic industry.

“Working with this industry is extremely rewarding.”