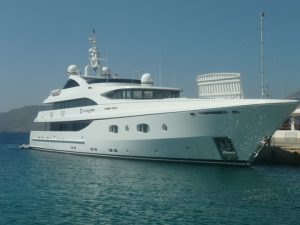 Sep 2013 -Over 100 of the world’s most luxurious yachts will be showcased over the next four days at this year’s Monte Carlo Boat Show, a key event in the super yacht calendar(source: Lloyd’s of London).

And despite recent turbulent economic times, demand for super yachts has remained steady. Each year they get bigger, more expensive and are seemingly equipped with more toys for the super-rich.

“This demands specialist underwriting and broking to understand the unique operation and service levels required by these incredible craft. In our experience, the Lloyd’s and the London company markets show a deeper understanding of what’s expected both in terms of coverage levels and top-notch claims service, ” he says.

Super yachts are arguably the ultimate in privacy and luxury. And by commissioning their own yachts, ultra-high-net-worth individuals can more or less create anything they want, as long as designs fit within safety regulations.

“Super yachts are now much bigger and more sophisticated than ever before – today a yacht would need to be 80 metres or more to get into the top 100, ” according to Feltham.

Many of the largest yachts being built today now come with more toys. For example, this year’s show will include the 42-metre yacht Sofia, with its own three-man submarine. The helicopters and submarines that adorn such yachts can also be insured by specialist Lloyd’s underwriters.

Prices paid for super yachts are on average down on the pre-financial crisis peak but are now more realistic, according to Paul Miller, an underwriter at R&Q Marine. But values for a typical mega-yacht are around Euro20-40m, rising more than Euro200m for the larger vessels, he says.

The big values and bespoke designs make the Lloyd’s market a natural home for insuring super-yachts, explains Miller. Lloyd’s ‘A’ rated financial strength is a particular draw for boat owners, he says.

Another trend in super yachts is where they sail. Increasing numbers of super yacht owners are taking their boats into new waters and beyond the traditional cruising grounds of the Mediterranean and Caribbean.

“The super yacht industry is still young and the second generation of owners now want to explore further afield to places like the North West Passage and heading east into Asia and the Pacific, ” says Feltham.

An increasing number of owners are taking their yachts to the Antarctic peninsula, explains James May, Deputy Marine Hull Underwriter.

“Not only does this present increased environmental hazards for the yacht, but there are other factors for the insurer to consider such as lack of emergency assistance or repair facilities in the area, ” he says.

Despite the high values, the on-board technology and quality of crew make super yachts a relatively good risk for insurers. “Standards for super yachts are phenomenally high, whether it is the quality of professional crew, levels of maintenance or regulation. They hire the best crew and there is no question of cutting corners, ” says Feltham.

Vessels above 24 metres are subject to a raft of regulations, covering safety, crew standards and qualifications, and fire precautions. In fact, super yachts are so heavily regulated that they are increasingly becoming more and more like commercial ships, according to Feltham.

“Boats are now so sophisticated that they can see bad weather and hurricanes coming – and because they are permanently crewed, they can quickly move the yacht out of harm’s way, ” he says.

Claims in the super-yacht insurance market are relatively low, although big losses do happen. For example, underwriters were concerned to see the newly built $39m mega-yacht Yogi mysteriously sink just off the coast of Greece in February.

However, the biggest risk to a super yacht is fire, explains Miller. Even a small fire can cause serious damage as these vessels are usually lavishly kitted out. Heavy weather damage is another cause for claims, while collision is another ever present danger, he says.