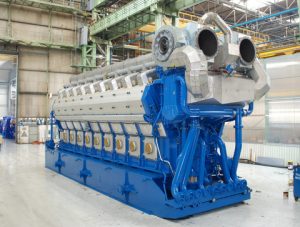 Wärtsilä Corporation, 15 October 2013 at 9.30 EET – This latest order further strengthens Wärtsilä’s leading position as a supplier of engines for LNG carriers. Since the first Wärtsilä 50DF engines were fitted onboard LNG carriers some ten years ago, approximately 65 per cent of all new LNG carriers have been fitted with Wärtsilä dual-fuel engines. Furthermore, Wärtsilä gas and dual-fuel engines are increasingly becoming the propulsion choice throughout all segments of the shipping industry.

The two orders are similar in scope of supply but have been issued separately. The first is from theNingbo Xinle Shipbuilding Group Co., Ltd together with its trading partner,  Shanghai CSR Hange Shipping Engineering Co., Ltd. The other order has been issued by Cosco (Dalian) shipyards .The ships are being built for two different Chinese owners, the Zhejiang Yuanhe Ocean Shipping Company and Dalian Inteh Group Co., Ltd.

Each vessel will be powered by a Wärtsilä 50DF engine, a Controllable Pitch Propeller (CPP), a gearbox and related systems. The Wärtsilä 50DF engines selected to power these vessels will enable them to operate primarily on LNG while retaining the option to switch to conventional marine fuels if necessary. Deliveries of the Wärtsilä equipment are scheduled to begin in the summer of 2014, and the ships will be launched approximately one year later. They will operate mainly in Chinese waters, and will transport LNG between terminals and to other ships.

Wärtsilä’s DF technology fits well the needs of the LNG carriers segment.  It offers a very high efficiency over the entire output power range, has the advantage of being able to use cheaper and cleaner fuel, and lower emission levels that enable compliance with current and anticipated environmental legislation. Wärtsilä DF engines can also be run at stable low speeds for extended periods of time.

“Wärtsilä has been a pioneer in developing the technology that enables LNG carriers to utilize gas as a fuel, and the technical strength of this technology has provided considerable added value for our customers. Chinese owners are beginning to invest significantly in LNG carriers powered by dual-fuel engines, and these latest orders will add impetus to the market, both in China and globally, ” says Aaron Bresnahan, Vice President Sales, Wärtsilä Ship Power.

The Wärtsilä 50DF engine is manufactured in various configurations from a 6-cylinder in-line version to an 18-cylinder version in V-configuration, giving 950/975 kW per cylinder and a total maximum mechanical output of 17, 100 kW. The engine speed is 500 or 514 rpm with 50Hz and 60 Hz applications. The maximum thermal efficiency is higher than with any other gas engine.

When operating in gas mode, the nitrogen oxide (NOx) emissions are at least 85 percent below those specified in the current IMO regulations, and CO2 emissions are some 25 percent less than those of a conventional marine engine running on diesel fuel. Additionally, the sulphur oxide (SOx) and particle emissions are negligible at almost zero percent.