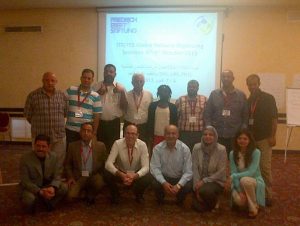 16 October 2013 – The first meeting of ITF-affiliated global delivery unions in the Arab World has ended with a vow to continue organising and building union strength throughout the region.

Activists at the meeting on 6 and 7 October, organised by ITF and funded by Friedrich-Ebert-Stiftung (FES) shared their experiences of organising, often under very challenging circumstances. There was an emphasis on the importance of engaging and organising young and women workers to build union strength in the region.

The group heard the amazing success story of DHL Bahrain activists. The union has grown significantly and achieved a collective bargaining agreement, despite operating in a challenging environment.

The group also learned more about the ITF’s global delivery campaign, including recent successes and how they were achieved, and how this could support the region’s organising work.

One seminar participant said: “This seminar was important and beneficial for our region. We now have a roadmap of basics and a reasonable period of time to move forward to organise global delivery unions in the Arab world. We also have a better idea of how to liaise with those unions and ultimately build stronger networks. I hope that these guidelines will be used to establish unions all around the Arab world.”

Activists declared they would focus on implementing the organising strategies they’d developed during the seminar and building a regional network, and will regroup for 2014 to build on these links.

You can read more about the ITF’s global delivery project >> and check out news from the ITF Arab World office >>.