IMO Secretary-General Koji Sekimizu: “In the forthcoming five years, the Northern Sea Route will be the main shipping lane for navigation in the Arctic” 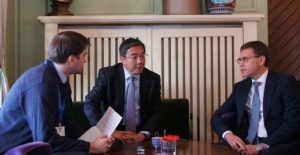 – Mr. Secretary-General, what do you think about the development prospects of the Northern Sea Route and about the safety level of navigation there?

– Do you expect increasing of shipping activities at the Northern Sea Route?

– I enjoyed the opportunity to navigate over the Northern Sea Route this summer and I was really impressed with the situation there: the waterway is free of ice as far as 90%.The ice-covered area is just only 10% of 1700 miles. That clearly indicates that in summer time it is possible to allow a large number of vessels going through the Northern Sea Route. If we ensure that icebreaker support will be provided then not only vessels carrying the minerals and oil from Russia to Asian countries but also the traffic from Asia to Europe will be increased.

– If you compare the future possibilities of the Northern Sea Route with the North-West Route of navigation in the Arctic area, obviously through the costal areas of Canada: there is a big difference. Based on the information that ice at the Canadian coast is still accumulated over the area, it is difficult to navigate even in summer time. Also the Canadian coast is much more complicated compared with the Northern Sea Route. The element of national regulation from the Canada is also to be maintained. There will be a number of different points. As far as I see the forthcoming five years, the Northern Sea Route will be the main shipping lane for navigation and passage.

– The Polar Code is being developed by IMO with the participation of Russian experts. How far is the experience of our country taken into consideration in this work? When can we expect the new document and what status will it have?

– The experts of the Russian Federation are already fully attending the IMO meetings and providing information based on the long years of experience in navigation in Arctic waters. We need to share the experience of Russian people over the navigation in the Northern Sea Route. I’m sure that at IMO meetings the technical information to be provided from the Russian Federation will be appreciated and that will become a basis for discussion at IMO. 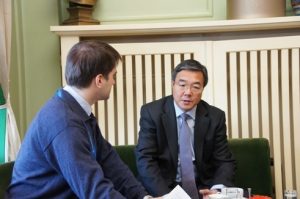 – We have been working very closely with the Navies provided from the European countries and other regions as well. And also the Russian Federation has provided naval forces.

Thanks to strong defense by Navies, and also shipping industry has taken its own preventative measures to be implemented onboard the commercial vessels, last year we encountered a serious reduction of piracy and that good direction and good situation continued so far. I really hope that current situation will continue so that gradually piracy off the coast of Somalia will disappear.

I really hope that our collaborative and corporative work will ease the situation with the Somalia piracy.

While I’m touching upon the piracy off the coast of Somalia in the Indian Ocean, still the piracy activity off the western coast of Africa is very high and we are paying a lot of attention for anti-piracy measures there. IMO encourages the African countries to establish a good mechanism of cooperation for anti-piracy measures similar to that we have established in other regions. We really hope that African countries will take up strong measures to impose and IMO will be ready to help them handle the piracy off the coast of Africa.

– What do you think about new environmental initiatives aimed at introduction of stricter requirements for shipping in the Baltic Sea? Don’t you think it can result in more pollution of the environment if cargo shifts to automobile transport from marine transport with growing cost of service?

– Application of the stringent requirements for NOx is currently at the discussion at IMO.

We have taken into account difficulties encountered particularly in Russia and the next meeting of the Marine Environment Protection Committee in spring next year will discuss this matter. I hope that we will take into account the difficulties encountered in the Russian Federation and then reflect it into some sort of a decision to be made at the next MEPC so that we generally maintain the IMO’s standards, but at the same time the interest of EU people will be also taken into account. It is up to farther discussion and at this stage I cannot pre-act what will be the final debate.

As for sulphur, we have adopted MARPOL Convention amendment. There are two elements involved: by 2015 within the emission control area (ECA, including the Baltic and the North Seas – ed.) we have to apply stringent sulphur regulations. As far as I understand, that could be achieved. The other target is the following: by 2020 we will impose stringent global requirement to reduce sulphur emission from ships, which should be applied all over the world. That may require a careful evaluation regarding weather oil industry could provide ample amount of low sulphur fuel by that time. I have suggested that the study of availability of low sulphur fuel should be accelerated. I’m sure that next year the Marine Environment Protection Committee will discuss this matter seriously and I hope that we will carry out important meaningful study for availability of low sulphur fuel. Sometime into 2015 we will evaluate, for example, how much clear energy will be made available for international shipping by 2020 and if the oil industry will be available to provide the required amount of low sulphur fuel. So we need to evaluate total amount of energy required for shipping industry by 2020  and then we’ll take a decision of what  should be applied to meet low sulphur regulation by 2020.

– When it comes to stringent requirements for a regional level, like emission control area, that has been debated at IMO already and I take into account all implications to the shipping industry as well as to the countries within the ECA. That has been done. It is a global process of discussion.  In 2008, they came to a conclusion so now it is in the process of implementation. Then, if we encounter any serious problem, the established standard should be modified, and this is a kind of activity of IMO. Until we come to the farther consideration I cannot predict what will be the outcome of the discussion.

Obviously, the shipping is international, therefore any regional measures will make an impact on global shipping. IMO applied this way of a sort of special requirements on top of global requirements.

– In this case, the decision was made by IMO globally, everybody participated in the decision making, not only the costal states.

– Yes, it is a global decision. For example, let’s take any requirement for air pollution. Stringent requirements are applied for the Baltic Sea and the Baltic Sea is surrounded with Russia, Estonia and all those littoral states like Finland, Sweden, Denmark, Germany… They proposed the stringent requirement, then that proposal was debated on a global level, and IMO involving all IMO member governments agreed to accept the proposal from the regional countries. This is the only way.