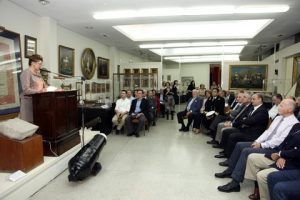 The President of the Hellenic Maritime Museum delivers her opening address at the Inauguration of the Exhibition.

The simple yet all-embracing event, jointly organized by the Museum and HELMEPA, showcased the ties between Greek maritime tradition and history and the environmental consciousness of the younger generations.

The Exhibition is comprised of 56 group works belonging to 920 students aged between 5 and 13 years, who herald from 30 cities, villages and islands from across Greece. These youngsters were participants in the annual Competitions run by the “HELMEPA Junior” Program between 2006 and 2013. 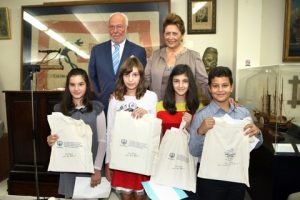 The four students from the Heliades Private School in Salamina with their commemorative special HELMEPA gifts, together with the President of the Museum and HELMEPA’s Director General.

Many supporters of both the Museum and HELMEPA honored the event with their presence. They included the Secretary-General of the General Secretariat for Youth, Mr. P. Kanellopoulos, representatives from the Ministries of Education and of Culture and Sports, the Chairman of the Board of Directors of the City of Piraeus, Mr. J. Xipolias, the Presidents of the Museum of the City of Athens Vouros-Eutaxias Foundation, Mr. A. Vogiatzis, of the Hellenic Offshore Racing Club, Mr. J. Maragoudakis and of WISTA Hellas, Ms. R. Mitropoulou, members of the Boards of Directors of both the Museum and HELMEPA, representatives from the Union of Masters and Mates of the Greek Merchant Marine and the Union of Engineers of the Greek Merchant Marine, members and friends of the Museum, HELMEPA Honorary Members and member-company representatives, the Director of The Institute of Oceanography, Dr. E. Papathanassiou together with scientists from the Hellenic Center for Marine Research, volunteer Teachers and members of the Press. 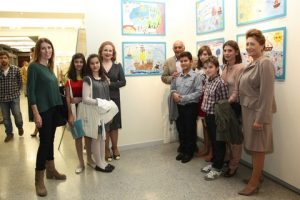 The students from the Heliades Private School and members also of the “HELMEPA Junior” Program, together with their parents and teachers, Ms Irini Daifa, Mr. Dimitris Lemonidis and the President of the Museum.

In welcoming her guests, the President of the Museum, Ms. A. Anagnostopoulou-Paloumbi, spoke of the important mission bequeathed to the Museum since 1949; the nurturing among youth of a passion for the sea and for maritime professions. She warmly thanked HELMEPA and expressed the wish that a closer cooperation between the Museum and HELMEPA henceforth begins. “HELMEPA”, she commented, “for the past 30 years has been a platform from which the social responsibility and heightened environmental awareness of Greek shipping takes flight”.

During his address, HELMEPA’s Director General, Mr. D. Mitsatsos, thanked the President and the Board of Directors of the Museum for kindly hosting the Exhibition. He made poignant reference to the value the Museum holds in the hearts of all and to the need for its preservation as part of our country’s maritime history and tradition. Children, he added, must necessarily learn about this history and tradition “because each exhibit is linked with those sacrifices made by Greek seafarers so that our country enjoys freedom today”.

Four youngsters, three girls and one boy, members of the “HELMEPA Junior” Program from the Heliades Private School in Salamina, whose work is on display in the Exhibition, spoke on behalf of the 15, 000 children who have taken part in these competitions between 1993 and today. They highlighted the reasons for which they take positive action towards the protection of the marine environment and Ms. Paloumbi then went on to award each of them with commemorative gifts from HELMEPA.

A guided tour of the Exhibition followed, during which guests admired the directness of the children’s messages conveyed through their works of art and the vibrant and imaginative means through which they appeal to those older than them to respect the marine environment as well as their concerns for its degradation and for their future.