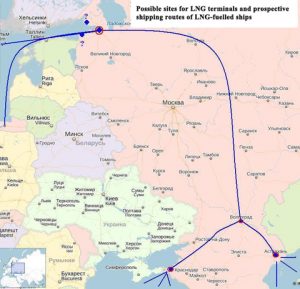 As Europe accelerates preparations for transfer of vessels sailing in the Baltic and North Seas to LNG, Russia only speaks about construction of required infrastructure. However, market players believe Russian LNG can be quite competitive in terms of prices, especially in case of adequate state support. They say, LNG plant should be better built in Saint-Petersburg, rather than in Ust-Luga, Vyborg or Primorsk.

To catch up and overtake Europe

According to the strategy elaborated by the European Commission, LNG refuelling stations should be installed in all maritime ports of European Union by 2020 and all large inland ports of EU by 2025. Port authorities are supposed to choose specific means of LNG bunkering and logistics on their own. LNG refueling stations are to appear not only in the ports of the North and Baltic Seas (sulphur emission control area, SECA), but also in other ports including Mediterranean ones.

Total investments into LNG terminal in Turku will make Euro 60-65 mln. The project is to be implemented in 2015.

The Port of Rotterdam and the Port of Gothenburg have entered into an alliance on construction of LNG production and shipment terminals. The project will get Euro 35.2 mln from EU budget.

Moreover, the following ports participate in the “LNG in Baltic Sea Ports” project: Aarhus, Helsingborg, Helsinki, Malmö-Copenhagen, Tallinn, Turku, Stockholm and Riga. Under the project, the works in the ports focus on pre-investment studies, feasibility studies for LNG terminals as well as activities in this sphere.

According to Mabux, average LNG price is $650 per tonne in Europe, gasoil – $975 per tonne, IFO 380 – $700 per tonne. Experts say consumption of LNG and conventional fuels is almost the same (LNG consumption per mile is even less). It means that in Europe, LNG is already quite competitive while it is to become even more attractive with introduction of requirements for sulphur content in marine fuel from 2015. The issue is in availability of infrastructure which is being intensely created with state support. Mabux forecasts that the number of vessels powered by LNG or by double fuel will hit about 1, 000 by 2020 (against several dozens today) with the global demand for this fuel to reach 34 mln t per year.

As Sales Manager of Wärtsilä Vostok LLC Vitaly Konovalov said at the Baltic Oil and Gas Week in Saint-Petersburg, LNG is the future of bunkering in the Baltic region while scrubbers are a temporary solution for vessels built earlier.
LNG prices may be even less in Russia as gas exporting country. To ensure competitiveness against European projects, LNG prices can be further decreased with a political will and state support.

According to the price report of IAA PortNews, average price of low-sulphur heavy fuel oil in Saint-Petersburg is currently $430 per tonne (against $613 in Rotterdam), as of the date of the article publication. After 2015 heavy fuel oil cannot be used within ECA. Even if other products with characteristics close to those of heavy fuel oil but sulphur content below 0.1% are used, their prices will be higher. So Russian LNG market will be competitive and attractive for ship owners provided that LNG prices are lower than prices of the cheapest oil products meeting new environmental requirements. It will also facilitate the development of shipbuilding cluster – as it is reasonable to build new LNG-powered vessels (according to estimates, conversion of old ones is not profitable in most cases).

The only Baltic plans in Russia have been announced by Gazprom OJSC which is going to build a plant for LNG exports capable of producing 10 mln t of product per year. The product can also be used for bunkering purposes. According to the available information, no decision has been made as regards the plant location. The ports of Primorsk and Ust-Luga are under consideration. Besides, there is a project on construction of an LNG plant with lower capacity near Vyborg (close to gas pipeline Nord Stream).

If Russia implements the above Baltic projects, they would suffice to arrange LNG bunkering in Russian ports of the Gulf of Finland. It seems only a matter of price and bunkering infrastructure.

However, when it comes to the location of LNG plant, Saint-Petersburg seems to be more reasonable as compared with Vyborg, Primorsk or Ust-Luga as the number of calls is several times higher there. Besides, the vessels calling at Saint-Petersburg sail run within Baltic and North Sea ECA.

According to the assumption made by Vitaly Konovalov (Wärtsilä Vostok), it is reasonable for Russia to create a floating LNG bunker infrastructure at the cost of the Gulf of Finland as it is more efficient than the truck-to-ship bunkering technology. Vitaly Konovalov thiks LNG bunker terminals should be also built near Astrakhan and Temryuk – at the entry to the Caspian and Black Seas so that mixed river-sea-going ships could be refueled with gas both in the Gulf of Finland and in southern seas.  When mentioning the Caspian Sea, Wartsila representative noted that a number of Caspian states, Turkmenistan in particular, have already planed to built LNG refuelling stations.

In this context we assume that construction of LNG infrastructure focused on transit shipping by inland water ways, it makes good sense to build LNG plant and bunkering terminal in Saint-Petersburg.

According to the comment obtained by IAA PortNews from Aleksey Shukletsov, Executive Director of Bronka project investor Fenix LLC, the demand for LNG would be ensured if LNG plant appears in Russian section of the Baltic Sea, especially in Saint-Petersburg (not necessarily at the coast), and if LNG fuel costs less as compared with other alternative fuels.

Moreover, we think that Russian geopolitical task related to the Black Sea could also be solved through LNG bunkering in Saint-Petersburg without fruitless attempts to create a container hub capable of competing with the ports of the neighboring countries. For example, to arrange a container line between Saint-Petersburg and Kaliningrad to solve the problem of tariff wars at the railways of Russia, Lithuania and Belarus. Such container carriers could use LNG as bunker fuel if adequate price is ensured.