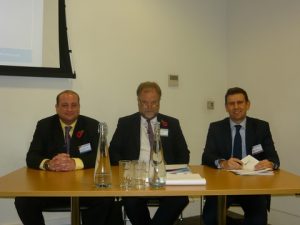 Vessel operating costs are expected to rise by more than three per cent in both 2013 and 2014 according to a new survey by international accountant and shipping consultant Moore Stephens.

The survey is based on responses from key players in the international shipping industry, predominantly shipowners and managers in Europe and Asia. Those responses revealed that vessel operating costs are expected to rise by 3.0 per cent in 2013, and by 3.2 per cent in 2014, with crew wages and P&I insurance the cost categories likely to increase most significantly. 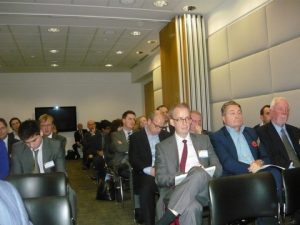 One respondent noted, “Cost-cutting and belt-tightening have gone as far as it is possible to go. The next few months will see the service industries return to profit, and they will do that by increasing costs.” Another said, “It is clear that the cost of sustaining our industry will go up, funding will become increasingly difficult, and more small and medium-size companies will disappear.”

“Owners are bleeding money, ” said one respondent, “but this is not having any impact on the likes of class surveyors, spares manufacturers and service engineers as they continue to charge heavily. Moreover, the quality of the product is going down while maintenance costs are increasing.” Other comments included, “Operating budgets are being maintained but not increased, ” and, “If the market shows a significant improvement over the next two years, we can expect a surge in operating costs, driven mainly by owners’ efforts to achieve improved performance from their ships.” 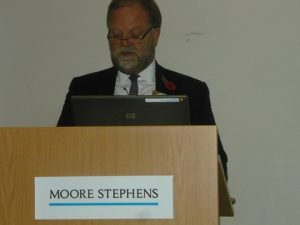 Richard Greiner at the podium

The cost of fuel occupied the thoughts of a number of respondents, one of whom noted, “Fuel costs remain the biggest chunk of our operating expenses due to surging price increases.” Referring to political volatility in the Middle East and increasing regulation on sulphur emissions levels, another respondent predicted that many owners would “have to switch to Marine Gas Oil, which will involve a very big cost increase. We have already seen how the switch between high and low-sulphur fuel is causing problems for some ships, and instances of black-outs and loss of power are on the increase.”

Elsewhere, a number of respondents referred to the effect on operating costs of a significant number of older vessels still operating in the market, with one predicting, “A number of these will be squeezed out by 2014, particularly those over 25 years of age.”

Moore Stephens also asked respondents to identify the three factors that were most likely to influence the level of vessel operating costs over the next 12 months. Overall, 21 per cent of respondents (compared to 27 per cent in last year’s survey) identified finance costs as the most significant factor, followed closely by crew supply (20 per cent). Competition was in third place, with 18 per cent, followed by demand trends (16 per cent) and labour costs (13 per cent). The cost of raw materials was also cited by ten per cent of respondents as a factor that would account for an increase in operating costs.

Moore Stephens shipping partner Richard Greiner says, “Ship operating costs fell by an average of 1.8 per cent across all the main ship types in 2012, so at first blush the predicted increase in costs for this year and next might come as something of a disappointment. In truth, however, the levels of increase anticipated for 2013 and 2014 are still way below many of those we have seen in recent years. Moreover, they have to be viewed against a number of serious challenges facing the owners and operators of vessels in today’s shipping industry.

“Crew costs, as always, emerged as a major concern for respondents, which is no surprise given the potential budgetary implications of the entry into force of MLC 2006 and the increasing involvement of both international and regional bodies in the oversight of crew competence and its effect on safety. Continuing the theme of previous surveys, fuel costs again featured prominently as a cause for concern, as did the cost of having to comply with increased regulation generally in the shipping industry. The latter, unfortunately, cannot be addressed by the expedient of applying new rules and regulations only to new ships, as suggested by one respondent. The regulators want a clean and safe shipping industry, and it is the industry itself, which includes a significant number of older vessels, that will have to underwrite the budget needed to achieve compliance.

“Speaking of underwriting, the projected rise in P&I premiums for 2013 and 2014 can be attributed, among other things, to a number of major casualties to which the clubs and their reinsurance underwriters have had to respond, as well as to the escalating cost of wreck removal. For these reasons, the anticipated cost increases are not unexpected. The fact that the projected increases for hull & machinery cover are lower than those for P&I is perhaps an illustration of the difference between physical loss & damage cover and third-party liability cover, and of the distinction between commercial and mutual insurance.

“The projected increases in vessel operating costs for the next two years will be difficult for owners, operators and managers to absorb. The good news, however, is that the global economic environment is showing continuing signs of recovery. The freight markets should feel the benefit of that, and that is what pays the bills.”

* Moore Stephens LLP is noted for a number of industry specialisations and is widely acknowledged as a leading shipping and insurance adviser. Moore Stephens LLP is a member firm of Moore Stephens International Limited, one of the world’s leading accounting and consulting associations, with 624 offices of independent member firms in over 100 countries, employing 21, 224 people and generating revenues in 2012 of $2.3 billion.