Top Posts
Don’t take chances where your health is concerned…
Large Diameter Drilling to partner with DEME Offshore...
Cyprus Ship Management Round Table Webinar and Debate
Lady Moura up for sale… plus more
Will the dollar decline? The changing landscape of...
TSUNEISHI SHIPBUILDING collects actual operation data by IoS-OP
Deltamarin is proud to be a part of...
Damen launches RoPax 6716 for the Port Authority...
Hot Port News from GAC
Marketing in Maritime Returns for 2021
Clean product tanker rates on US bound trade...
Home EnergyAlternative Sources of Energy NYK presents ICS with scale model in honour of Chairmanship
Alternative Sources of EnergyAwardsEnvironmentEventsInternational Chamber of ShippingInternational Shipping FederationNewsShipbuilding and ShipyardsTechnicalTechnology

NYK presents ICS with scale model in honour of Chairmanship 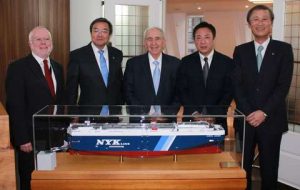 The International Chamber of Shipping was last night honoured to be presented with a model of the award-winning NYK car carrier ‘Auriga Leader’ to mark the Chairmanship of Mr Masamichi Morooka.

The scale model of the world’s first solar-assisted vessel to be put into commercial service was formally presented to ICS by Mr Yasumi Kudo, President of NYK, in the presence of the ICS Chairman.

The 60, 000 tonne vessel is fitted with 328 solar panels which can generate as much as 40 kilowatts of power. The car carrier fist set sail in December 2008 and since then engineers have further developed energy saving techniques to enhance her hybrid power. Large nickel hydrogen batteries can now store and capture the solar power, helping to minimise output fluctuations from the diesel power generator to produce a more stable and steady supply of energy throughout voyages.

The ‘Auriga Leader’ was further updated to use low sulphur fuel oil to reduce air pollution and fitted with a ballast-water management system to prevent aquatic pollution.

Mr Kudo told guests: “We at NYK would like to honour the ICS and commemorate Mr Morooka’s chairmanship by presenting the gift to ICS of a specially designed NYK model vessel, the Auriga Leader.  He added: “We very much hope that the model of the Auriga Leader will serve as a reminder of what can be achieved through collaboration and inspire further environmental innovation within the shipping community.”